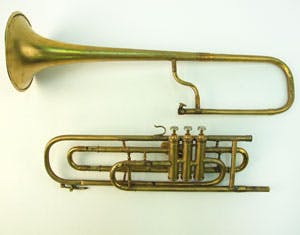 In 1950, the Birmingham School of Music purchased, through the then-head of brass, Harold Greensmith, a large number of 19th Century brass instruments from Lancelot Key.

It is unclear as to what connection Key had previously with the School, or to Birmingham, but he was persuaded to sell the collection to the School, apparently at a knock-down price.

"Mr. Key had been impressed by the work done on brass instruments at the Birmingham School of Music under the leadership of Dr. [Christopher) Edmunds and, as he was seeking a home for his collection, he offered it for the use of the School at a very advantageous figure".

“Although desired by both American and Canadian sources, and a London buyer for museum purposes, and a considerably larger price could have been obtained, it was secured for the Birmingham School of Music because Mr. Lancelot Key felt that here it would be more practically used. In his own words, he ‘did not wish it to become a dead thing in a glass case’".

“It is probably true to say that only in a live School of Music peopled by students and teachers with enquiring minds could his wishes have been met.”

The Galpin Society borrowed several of the brass instruments for their contribution to the 1951 Festival of Britain Exhibition.