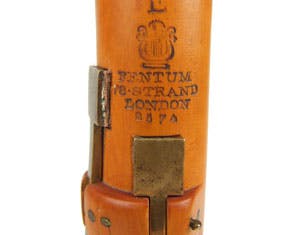 His enthusiasm for music and for developing the activities of the school left its mark in many different ways, including encouraging the formation of a musical instruments collection. By that stage, the collection included the Dodd bows and a number of instruments he donated, although it is unclear whether they belonged to him or whether he procured them on behalf of the School.

Among these instruments are the Flageolet, the Hastrick Double Flageolet and the Cahusac Fife.

In the first catalogue of the historical instruments (1953), some of the items which Bentley donated are also noted as being from the Shareshill Church Collection.

It is believed that this collection formed a gallery band for Shareshill, Staffordshire. The instruments include the Bilton Piccolo and Clarinets by Fentum and Cramer.