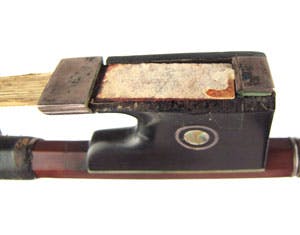 This is a collection of English violin, cello and double bass bows by John Dodd, James Dodd and Edward Dodd junior, and one French violin bow by Tourte. It has been in the possession of Birmingham Conservatoire since the early 20th Century, when it was donated to the Birmingham School of Music by E S Fry, in 1904.

At this time, there was generally far less interest in historical instruments - either from a music history point of view, or an instrument makers’ point of view - particularly in bows for string instruments. It is perhaps reasonable to assume that Fry accumulated the bows out of general curiosity and not necessarily because of musical or historical reasons.

Had the collection remained in private hands, it may not have been kept complete. Fortunately, its donation to the School of Music has meant that the collection has remained intact, and it has been added to in recent years through further donations. It is now one of the most extensive and comprehensive of its kind.

There are examples of bow-making from every major member of the family:

Items in the Dodd Bow Collection can be viewed here.