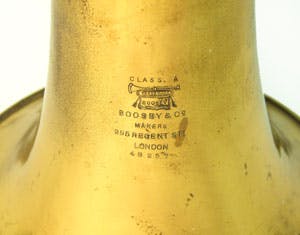 Birmingham Conservatoire has one of two surviving contrabass trombones by Boosey & Co. The largest of the trombone family, the contrabass had no specific repertoire in Britain at the end of the 19th Century. The examples made at the Boosey & Co factory were specifically produced to enable performances of Wagner’s operas in London during the 1880s and 1890s, primarily under Henry Wood and the Queen’s Hall Orchestra.

The comprehensive archives of Boosey & Hawkes, now kept at the Horniman Museum in London, tell us a great deal about the instrument; not only when it was made, but which craftsman made it, when it was sold and to whom.

The Mest Lute shell is an unusual item in this collection and there exists a number of records relating to its more recent history.

It is both the oldest item in the collection and among the first recorded donations to the School of Music. It was evidently regarded as being of historical significance, as the minute books at the time, in 1895, give details of the instrument and maker - far more information than for most other donations.

At this time the instrument was attributed to Michael Hartung, the late 16th Century German maker, who was active in Padua between at least 1591 and 1627.

This misattribution was due to the original maker’s label being worn, obscuring the text in a crucial place. The error was not spotted until late 2007 when Lynda Sayce identified the instrument as being by Raphael Mest.

The whole soundboard and neck were still attached to the shell at the end of the 19th Century, so it is quite understandable why this misattribution was made. The text on the badly deteriorated label has been reconstructed by comparing its wording and spacing with that of other known examples of Mest’s work.

In addition to the original label are four further labels, by makers and repairers, which fill in some gaps in the 300-or-so years between its making and it arriving in Birmingham.

The next labels chronologically after Mest are of Antonius Bachmann (“Reparirt”, Berlin, 1753), then T A Matth (“Reparient”, Berlin, 1822), then Rogers and Priestley (“me refecerunt / Birmingham 1891”).

It is likely that Rogers and Priestley made the most significant changes to the shell during their remake in 1891. This includes cutting down the rim and removing the end-pin. These alterations were probably made for A M & Royle A Shore, who donated the instrument to the School of Music in 1895.

Perhaps the most significant changes were made by the last repairer/maker, Zachary Taylor. In 1981 he was approached by the former custodian of the historical instruments, Stephen Daw, to investigate possible woodworm in the soundboard. The extent of the woodworm damage was such that the neck and sound board had to be permanently removed and destroyed.