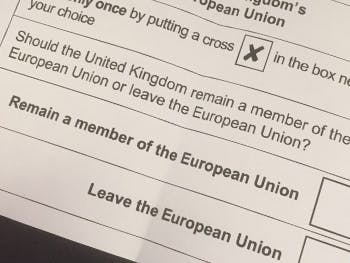 Responding to the result of the European Union referendum and the decision of the British people to vote ‘Leave’, Birmingham City University would like to emphasise that it is highly unlikely there will be any significant impact on EU, international or UK students for the immediate future.

The University supports with the position of Universities UK, which today issued the following statement:

"Barring unilateral action from the UK Government, members are advised that the vote to leave the European Union (EU) does not mean there will be any immediate material change to the UK university sector’s participation in EU programmes such as Horizon 2020 and Erasmus+, nor to the immigration status of current and prospective EU students and staff.

"Article 50 of the Lisbon Treaty foresees a two-year negotiation process between the UK and other Member States, during which time the terms of the UK’s exit from the European Union will be decided.”

Universities have been seeking clarity about the implications of Brexit for their EU students, international exchanges and for funding from EU research projects.

A statement from the Student Loans Company says that those EU students who are already studying in the UK will not face any changes to financial support, such as loans to cover tuition fees.

Birmingham City University Deputy Vice Chancellor Professor Julian Beer said: "While clearly this is an outcome which will create some new challenges for ourselves and other universities, the process of leaving the EU will take time and things will certainly not change overnight.

"The many European Union students and staff studying and working in the region should be reassured that this decision is unlikely to have any impact on them for some time to come.

The British education system is among the best in the world and during the transition period and beyond it is important that we continue to provide a place for EU students to come and study, as we have done over many years.
Professor Julian Beer

"During the campaign, Vote Leave representatives made it clear that current investment into Higher Education research and student exchange opportunities need not be impacted by Britain departing the EU. We will join with other universities in seeking more detail on the changes and opportunities this decision has presented."