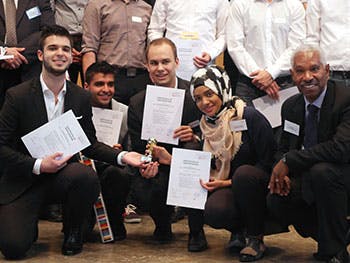 Students from Birmingham City University's Business School emerged as the winners of an international business competition in Germany last week, fending off competition from a host of European countries.

The four students won the International Entrepreneurial Brains Made on Campus 2015 Competition, hosted in Stuttgart from Wednesday 15 to Friday 17 April.

Their business idea beat off rival entries from Austria, Hungary, Germany, Scotland and Switzerland, securing votes from a judging panel made up of figures representing successful start-up companies, large multi-nationals and the Stuttgart Ministry of Finance.

Their business idea centred on a website that would allow students to sell their text books once they are no longer needed, an idea now being discussed within the university.

Speaking after picking up a trophy for the win, Martin Seppam said:

I can’t believe that we have won. It has been such a great experience and I know that I’ve learnt so much in such a short time. It’s great to put the theory into practice.

Ron Brown from BCU's Enterprise Innovation and Business Engagement team accompanied the team to Germany. He said: "Winning such a prestigious European competition is a real credit to our students and demonstrates the transferable entrepreneurial skills they have learned while studying at Birmingham City University Business School.

"It is also a great example of the entrepreneurial games and programmes Birmingham City University offers our students, as well as graduates and staff."

Dr Hartmut Rösch from Stuttgart Media University, said: "Every year the competition gets better and better and this year was the best yet. All the way though there were a couple of teams that could have won it. We didn't know until the very end of the competition, which team would be announced as the winners."