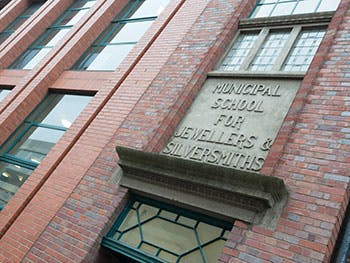 Birmingham’s historic School of Jewellery has been revealed as the location for BBC Two’s new primetime jewellery show ‘All That Glitters’.

The show, which launches next week (April 13), had teased its studio workshop as being based at a secret location in the heart of Birmingham’s Jewellery Quarter, which has now been revealed to be Birmingham City University’s Birmingham School of Jewellery.

Filmed last summer at the 131-year-old site, the six-part series fronted by comedian Katherine Ryan will see eight of the UK’s best jewellery makers battle it out to make two pieces set by the All That Glitters judges.

The first piece will be designed to appeal to a mass audience and the second tailored for a client in need of a statement piece for a special occasion.

The show’s judges are award-winning British designer Solange Azagury-Partridge and Shaun Leane, who has created ground-breaking catwalk jewellery with Alexander McQueen, and designed Princess Beatrice’s engagement ring as well as fine jewellery for clientele including Lady Gaga and Elton John.

“It fills me with joy to see the art of jewellery making, which I have practiced for 36 years, come to life on the screen and be transmitted into homes for everyone to enjoy,” said Shaun. “The programme perfectly captures jewellery as a craft with all its different facets of intricacy, emotion, dedication and passion.”

Founded in 1890, Birmingham City University’s School of Jewellery provides courses such as silversmithing, horology and gemmology at its home in Birmingham’s historic Jewellery Quarter.

The School celebrated its 125-year anniversary in 2015, followed by visits from Her Royal Highness The Countess of Wessex, HRH The Prince of Wales and The Duchess of Cornwall.

In 2019 the School was named the winner of the prestigious Queen’s Anniversary Prize in recognition of its history of innovation spanning 130 years.

“I am delighted that we have had the opportunity to work with the BBC on this project,” said Head of School, Professor Stephen Bottomley.

The School will be in a brand new spotlight and it will give us all immense pride.
Professor Stephen Bottomley

All That Glitters airs on BBC Two at 8pm on Tuesdays, beginning on 13 April.