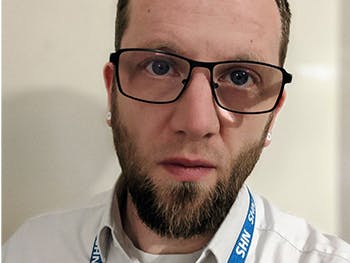 Mental Health Nursing alumnus Ed Freshwater has had quite the career since he graduated in 2015.

Not only has Ed worked his way up to a managerial position of a community mental health team in Coventry, the graduate carried out the role of Chair for the Royal College of Nursing’s Mental Health Forum and been part of the team that created the annual Mental Health Nursing Day. He also hosts a podcast which looks at the intersections of mental health nursing and politics.

We caught up with Ed to see what his role has taught him, the impact Covid-19 has had on mental health services and what more we should be doing to support those around us.

What is it like being a mental health nurse?

It can be overwhelmingly busy. There are challenges but also privileges, especially if you are working with a crisis team. I meet people at their very worst moments, and the honour and the privilege that I have is that they allow me to be the person that they speak to. It’s never the same twice. It’s always scary, but that fear is the thing that keeps me going.

That worry of ‘are they going to be OK?’ keeps you working to the best of your ability to meet that person’s needs. Mental health nurses need to have good supervision in place and good people that they can speak to about the things that they are having to deal with. But it is a real honour and a privilege to do the work of a mental health nurse.

Have you seen an increase in mental health issues since Covid-19?

The pandemic has laid bare a lot of issues that were bubbling away under the surface before Covid-19. People’s anxieties have gone up and they are more worried about their health and that of their families. But for those people who are most marginalised from society because of their mental illness and their situations – such as people who have severe mental health problems who were finding life very difficult in the first place – have had a lot of their social support kicked out from underneath them.

It has been much more difficult for people with schizophrenia or severe bipolar disorder to engage with society. Ultimately, the people who have the least are the ones who have struggled the most. So whilst you can do video chats with most people, there are some people who don’t have enough credit on their phone or perhaps don’t even have a smart phone because they can’t afford one. There are people who simply can’t engage in the system and that’s a huge problem. The people who are most marginalised are those who have suffered hugely and it will take years of investment to fix this.

How can we support those around us who could be suffering with their mental health?

Looking out for your neighbours is a big part of supporting those around us. The stigma around mental health is that when we see someone acting a bit bizarrely, we tend to cross the road and stay away from them, but sometimes it really is just about asking them if they’re OK and giving people basic human interaction.

It’s about being compassionate to other people. There are many people who are desperately struggling to cope. Just look out for those around you and ask them if they are OK, can you get them anything and would they like to chat.

Are we seeing attitudes change towards mental health?

We’ve seen a lot of work recently from those trying to address the stigma around mental health. There’s been a huge amount of awareness to tell people that it’s OK if they have a mental illness and that they are not alone. That said, the real issue has been that as awareness rises, more people go looking for help at services that were already overstretched, and that can make things more difficult. There are people looking for help, but due to long waiting lists, they aren’t getting the help and support when they need it most. These waiting lists can also discourage people from reaching out for help.

We have seen some level of change, but the stigma still remains for the more serious mental illnesses like schizophrenia and bipolar disorder. People who have personality disorders still face appalling stigma. Awareness has created a huge amount of change, but challenging people’s attitudes towards more serious issues and having access to services are still colossal issues.

What more can we be doing for our own mental health and others?

Don’t bottle stuff up. When someone comes to you with an issue, don’t dismiss it, as they’ll just keep it to themselves instead. The most important thing for your mental health and that of other people is just to be nice to people. Things like eating well and sleeping well improve our mental health, as well as physical wellbeing.

Ultimately, we need to become a much more tolerant and a more giving and accepting society. This will only happen when people change their attitudes, are not so self-centred and think of people more as a community, rather than individuals.