Graduating into the pandemic: One year on 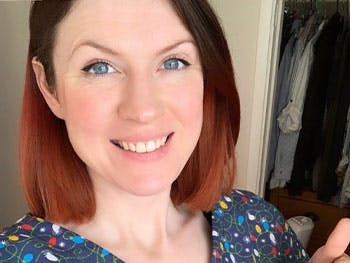 Adult nursing alumna Claire Carmichael, who graduated from BCU in January 2020, found herself on the frontline of a global pandemic just weeks into her new career.

A year on from the UK’s first national lockdown, we caught up with Claire, who is now a Practice Nurse in a doctor's surgery, to see what her first year as a qualified nurse has been like.

So what has the past year been like for you as a newly-qualified nurse?

It has been a rollercoaster with so many ups and downs. When I graduated and got my first post shortly after, I was really excited. Suddenly you’re a nurse and not a student anymore, and I think that was the hardest bit of my journey – the transition from being a student and going into nursing.

I beat myself up a lot about it in the first few months because patients would ask me things that I didn’t know the answer to, and I used to think, ‘I should know that’. I got very down about it for the first few months, but then it picked up again. The past few months have been better. I changed practices from a surgery in Southampton as it was a long journey into work. The travel alongside a long day was really tiring, so that’s when I made the move to a practice in Fareham, which is only a five-minute walk away from my house, which is amazing. That small change has made such a difference, and I’m going into work happier and surrounded by a great team who are so supportive.

How has the pandemic impacted the role you carry out every day?

As a newly-qualified nurse, there were pros and cons to it. The pros were that I wasn’t already in a set routine, whereas some nurses had been doing it for years and their routine had to change because of the pandemic. Whereas coming in fresh like me, it wasn’t as difficult as I didn’t have an established routine, so I’ve been able to just go with the flow.

The cons have been that my training was pushed back. To be a GP nurse, you have to do a different level of training. That all got pushed back until September 2020. I had a long wait until I was able to do any training, which meant that I was stuck doing things that I could already do and received the training for at BCU, like electrocardiograms (ECGs) and injections. As I wasn’t able to learn new things, I got frustrated, which is one of the reasons why I got so down about it all.

As soon as my course started in September, I was well away and getting signed off to do baby injections and smear tests. Everything has been so different because of the pandemic. As we didn’t know a huge amount about the virus at first, our doors were locked and we were only seeing absolutely necessary patients. Things are starting to return to some kind of normality now, as I’m seeing a lot more patients and am able to do a lot more too.

How has it felt to be part of the NHS during the past year?

I am so proud! What a time to come into nursing. It’s been such a privilege and an honour to be part of healthcare right now. Being a Practice Nurse, I’ve been part of the vaccination programme, so doing my first vaccine clinic was a really proud moment, and hearing amazing comments from patients about how grateful they are to get the vaccine. It’s been tiring, but so rewarding.

Have there been any more rewarding moments in the past year?

The vaccine clinic has to be one of the highlights as it’s such a massive milestone and not something that many people can say that they’ve done. Just helping patients too has been great, and going out of my way for a patient and knowing that I’ve done a good job at the end of the day – that’s when I feel happy and content, and feel so proud that I was able to do something for them.

I’m now also part of the GP Nursing Shared Decision-Making Council for NHS England, so that was a big moment too, as I was asked to be part of that as a newly-qualified nurse and they wanted someone who was fresh and new to the role, and it’s been so interesting. It’s great how we can create change and learn from the first wave of the pandemic, so that if it ever happens again, we will know what we’re going to do and how we’re going to tackle it.

If you could go back to a year ago, what would you tell yourself?

I’d tell myself to go easy on myself. I gave myself such a hard time, and I caused my own problems in a way as I was putting myself down so much. I think I would say ‘go easy and remember that you’re still new to the role, so you’re not going to know everything’.

What advice can you give to nursing students who are graduating this year?

BCU prepares you very well to be a nurse, but you can never be fully prepared for this transition. Don’t beat yourself up, and don’t expect to know it all because you won’t. At times, you will feel overwhelmed and you’ll put yourself down. The transition is hard, so be prepared for it, get yourself a good support network and take each day as it comes.