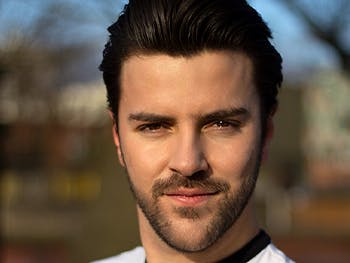 The Prince of Wales pub in Moseley is launching an exciting new programme of theatre nights, kicking off with 1902, a moving and humorous play written by and starring Royal Birmingham Conservatoire graduate Nathan Dunn.

Set in a pub during the 2016 Scottish Cup Final, the production charts the lives of a group of friends as they grapple with love, friendship, poverty and the fortunes of their beloved Hibs football club.

The play was a sell-out and received five-star ratings from critics during its previous run at the Edinburgh Fringe Festival, and is set to return to the popular arts festival this August. As well as Nathan, it features Conservatoire graduates Ella Stokes, Jonny Tulloch and Gregor Copeland among the cast.

Nathan said: “I’m so excited that we can now put our play on, in the city that I’ve been living in for the past three years. Performing it in a pub, during the Euros will only add to the atmosphere.

“The play is based on my own experiences of growing up as a working class laddie in Scotland, following a football team, and dealing with whatever pleasures and hardship that brings. I think a lot of Blues and Villa supporters will identify with that!”

The programme of theatre nights has been launched by the Prince of Wales to help support the local arts community during the pandemic, and further live shows are planned.

General Manager Sterling Archer said: “The Prince has always been known as a venue that supports the arts and has always welcomed performers and creatives. It has been part of our DNA, and we want to develop this aspect of pub-life and support the artistic community following the hardships that this sector now faces.

“We really hope that the people of Birmingham will embrace the chance to check out pre-fringe productions in an informal and familiar setting.”

Tickets cost £10 and are available online, or can be purchased in line from behind the bar at The Prince of Wales. For further information and to discuss future projects, email princeofwalespubtheatre@gmail.com.