A BCU Child Nursing Alumna has been thanked for her incredible work in a TikTok video which has now gone viral. 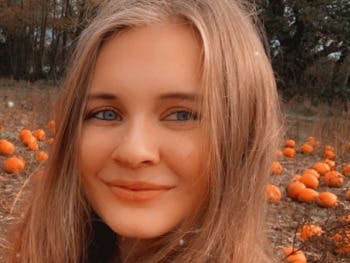 Aimee Paterson completed her studies in BSc Child Nursing just two months ago, and she is due to graduate in January 2023. The alumna recently discovered a video by a parent thanking her for her work at Birmingham Children’s Hospital in December 2021.

Natalie Ridler, from Swansea, was in Birmingham with her son, Morgan, who was in intensive care after having surgery to remove a tumour.

Aimee, who now works as a Newly Qualified Nurse on the Pediatric Intensive Care Unit (PICU), is originally from Cardiff, and Welsh is her first language.

Aimee heard the mum mention that speaking Welsh to Morgan helps to soothe him.

Aimee said: “I was on placement on PICU at Birmingham Children’s Hospital in December 2021, when I was caring for Morgan and his family.

“His mum mentioned that she speaks Welsh and uses Welsh phrases to comfort him, especially in English hospitals.

“I wrote a few Welsh phrases such as 'You're safe' and 'You're ok' on a continuation sheet for myself and other staff to use.”

Natalie and the rest of Morgan’s family weren’t able to stay overnight with him after his surgery, and he became distressed during the night.

But Aimee’s colleagues were able to help soothe Morgan, thanks to the phrases that Aimee had noted down in Welsh for them to use.

Morgan, who is now three, has been through eight rounds of chemotherapy and has recently had a clear scan.

After Natalie requested her son’s medical records, she came across the note that Aimee had provided her colleagues with, and soon took to TikTok to thank the ‘incredible nurse’ and to track her down to say thank you.

In the video, Natalie said: "It was a very moving thing to have done. You know that she probably didn't think it was a big deal when she was doing it. She was just trying to make sure Morgan felt OK. But it meant the world to us and to Morgan, I imagine, as well.

“I feel like that's an incredible thing for a student nurse to do and it's so heart-warming and it's really, really touched me that she did that.

"What an amazing nurse she's going to make one day."

Aimee was shocked to find a video about her work going viral on TikTok.

She said: “My friend Sophie sent the TikTok to see if Natalie, Morgan’s mum, was referring to me.

“I felt very humbled and immediately commented on the video to say it was me. I was so shocked about how moved everyone was by just one kind act.”

Aimee is delighted to have received recognition for her work. She said: “Recognition is so nice, especially during your nursing career.

“Patient centred care is vital, so it is important to listen to everything your patients and family are saying and act on it. Families will remember you for a lifetime.

“Being there for families and watching their recovery is my favourite aspect of the job. So, I really appreciate all the support and comments I have received.”

Learn more about our four fields of nursing - adult, child, learning disability and mental health, and our MSci dual awards.