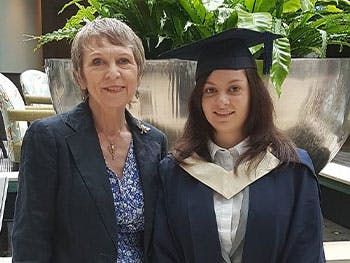 An unlikely friendship between an alumna and a support worker allowed the duo to achieve their goals at BCU.

Steff Hanson, 25, graduated from BCU in 2017 with a BA (Hons) in Media and Communications. But education hadn’t always been easy for Steff, who has autism and often struggles with self-belief and confidence.

While studying for her BTEC at North East Worcestershire College, Steff was assigned a new support worker, Madeleine. Steff said: “I’d had a rough time with support workers before I met Madeleine, and I immediately had my guard up when I first met her. But when I realised that she was going to be able to help me, it was so refreshing. She would question me and my work, be curious about what I was doing and would be there for advice, as well as encouragement and support. When I told her that I wanted to go to university, I asked if she would come with me.”

When Steff chose BCU as her place to study in 2014 due to its location and friendly atmosphere, arrangements were put in place so that Madeleine Slater-Vaughan was able to attend lectures and seminars with Steff, and be there to support her throughout her degree.

Madeleine said: “The sensory overload of university is phenomenal. The number of people, noise, lights, not knowing where you’re going, living with other people. It’s a lot to deal with.

“This work is very much student led and all students want different things and the mentoring covers organisational skills, talking to lecturers, giving advice, discussing health, nutrition, sleep, creating a timetable and talking through any fears and worries so that the student is actually able to concentrate on the work and what they are at University to do.”

Steff often struggles to control her emotions and suffers with anxiety, but was keen to go to University. However, she was concerned about processing information in lectures: “I would find it really difficult to take notes when the lecturer was talking and be able to process the information at the same time. It was great to have someone there for me so that I didn’t feel like I had to do it all by myself.

“University life comes with a lot of challenges, so having her there helped a lot. Sometimes I lacked self-belief and would feel swamped, but Madeleine would help me break things down. It is so important to have someone there to help you and I always felt like I could go to Madeleine about anything I was going through. Having her there was the difference between getting my degree, and not.”

Since graduating, Steff now manages communications and social media for an audio company, as well as creating content for her YouTube channel, acting and playing music: “I chose my course because I didn’t want to do something that could limit me. Media jobs are hard to get, so I wanted to learn as many different skills as I possibly could.”

Madeleine has stayed working at BCU as a Specialist Mentor and Study Skills Support and now supports 10 students across a variety of faculties: “I did think that when Steff left BCU, that it would be the end of my time at BCU. But I was asked to stay on and support other students, which I was delighted about.

“With Steff, I worked exclusively in Media and I have never met such a team of people who are so caring and supportive to their students. They valued Steff and they supported me through losing my husband after he passed away in 2019. I now work with many different faculties and in each department, I have found that level of care and support.”

Despite no longer spending every day together at BCU, the duo are still close and meet up in their hometown of Redditch regularly, and are grateful to have each other in their lives. Steff said: “Madeleine was put in my life for a reason, I couldn’t have done it without her.”

Madeleine believes it is crucial for universities to understand what they can do to support students with autism. She said: “People with autism have unique gifts and talents and they think outside of the box, but they sometimes lack confidence to ask for help and support if they need it. All they need is that little more time and patience, flexibility and words of encouragement.

“The spectrum is huge, so it is vital that people understand. We shouldn’t be saying ‘this is the world and then these are people who have autistic tendencies’. Why should they be the ones that are ‘odd’? We’re all human beings and we all function slightly differently.”

“The support is there for you at BCU, but if you’re worried about people knowing that you have that extra help, nobody needs to know that you have a support worker if you don’t want them to know.”

Steff’s advice to other students with autistic tendencies is to find a safe space: “When I struggled with sensory overload at University, I would go to quiet and calming places, like Waterstones in the city centre and even the Royal Birmingham Conservatoire.

“I was used to having a support worker before going to University so it didn’t faze me, but others may be afraid to ask for support. The help is there for you, and it allowed me to grow tremendously as a person at BCU and push me out of my comfort zone.”