BCU Alumnus Luke Perry is set to unveil his latest sculpture ‘The Ribbons’ which will be at the heart of the Birmingham AIDS and HIV memorial. 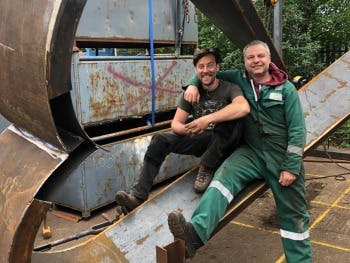 ‘The Ribbons’ has taken over 18 months from initial idea to being brought to life in a major sculpture which will sit outside Birmingham Hippodrome and will be unveiled at an event to mark World AIDS Day.

Luke, who graduated with a BA (Hons) in Fine Art in 2003, has been creating public art for over 15 years, aiming to represent those who are underrepresented. His family has a long history of chain making and working with heavy metal, and he makes all of his own work.

When creating ‘The Ribbons’, Luke worked closely with Garry Jones, who is the concept artist of the sculpture as well as the founder of Birmingham Pride. The alumnus then worked to bring Garry’s vision to life with a small team at his workshop in Cradley Heath.

He said: “Garry and I worked together to turn his initial paper design concept model into the actual sculpture. His design was so simple and iconic that I knew that we could, with great structural difficulty, turn it into a huge monument.

“After working on the design with Garry, I was able to work at my workshop with a small team of metal workers, crane operators and forklift drivers to build the four huge steel arms of the ribbons before welding them together in open air. The project looks simple, but the techniques to make it are very time consuming and complicated, as well as sometimes dangerous. 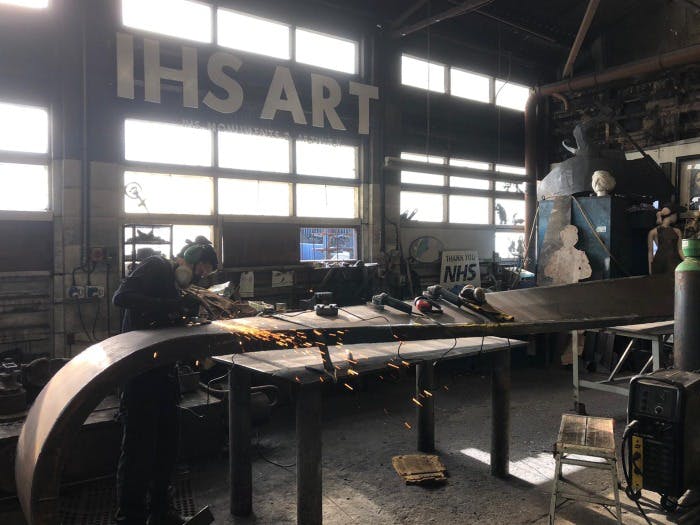 “The material is Coreten Steel, a weathering steel which will not degrade even though it rusts. It is a huge sculpture, because Garry and I knew that we needed to make the biggest and most visible statement we could.

“It's taken a full year to produce, and I don't know if I've ever been so proud of anything before.”

The huge sculpture shows two AIDS ribbons which have been dipped into heart shapes, with a rusting ribbon intwined with a red ribbon, to illustrate the devastating impact of AIDS and the pain that it caused the gay community.

Luke said: “The sculpture is two AIDS ribbons, one rusting and one red. The meaning of this is that there was a terrible time when the virus was used as a weapon to vilify the gay community, both here and in many other countries.

“The negative impacts of this, and its consequent stigma and detriment to the way it is medically treated, cost the lives of millions and for many more changed the way our community saw itself. This is not a gay disease, but the legacy of the way that it was treated in the 1980s lived on for so long that it has inextricably linked itself with gay men and created incredibly damaging social effects. That is why one is rusting, to represent the past, and one red, to represent hope, progress, and pride.

“The sculpture is so important because it is not just a symbol of hope and pride for a community that has suffered stigma and shame, but it is also a promise. By bedding this into the earth of our nation, we make an immovable statement that this neglect must never happen again, that we must never infringe upon human rights for an agenda, and that we can never neglect people because they are deemed to be 'other'.

“As with all good public art, this is a punctuation mark between the past and future, and it says never again.” 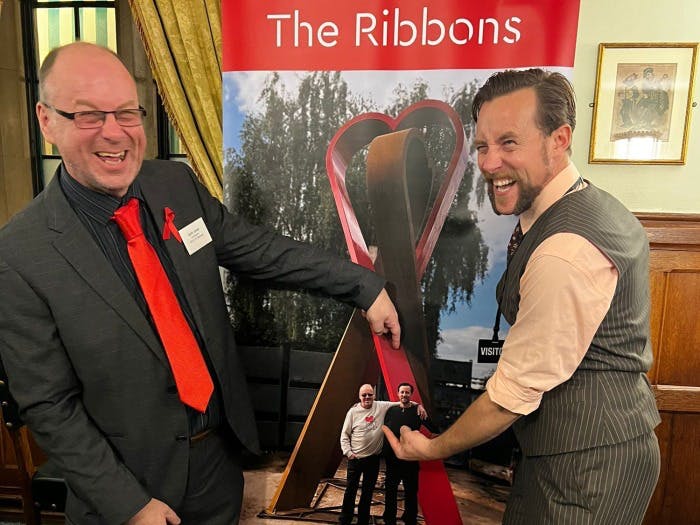 The sculpture also has a personal meaning for Luke and allowed him to feel part of a positive revolution.

He said: “I have always been a part of the gay community in Birmingham and as a bisexual man growing up on the gay scene, I know how people can be treated and othered because of stigma.

“I also know how brilliant and beautiful a lot of these people are and how the judgements of the past are completely ignorant. I was always aware of what AIDS was and how incredibly dangerous it could be, and so all these things formed within me as a young man.

“It is so incredibly important to me to be able to contribute personally to something that remembers those who never had the chance to live, point responsibility at those who allowed it, and celebrate the distance that we have come since then.

“Working with Garry and the incredible Birmingham AIDS and HIV Memorial team has been beautiful, celebratory, and allowed me to feel part of the positive revolution.

“I am empowered because of this work, as so many people are.” 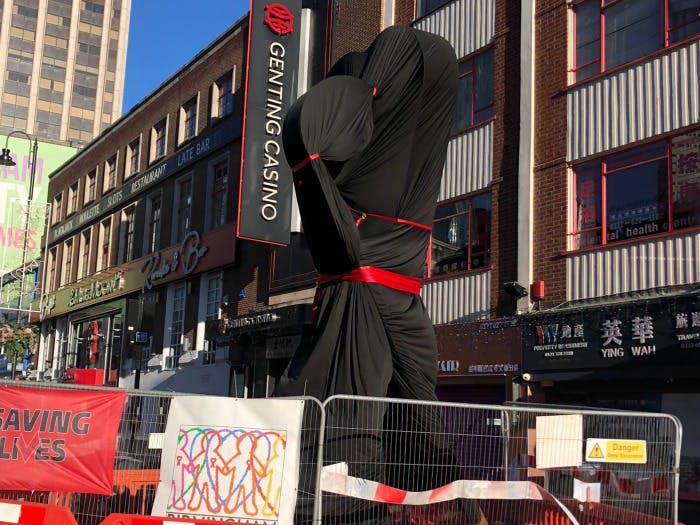 ‘The Ribbons’ is set to be unveiled at a major event on Thursday 1 December, which is World Aids Day, in Southside’s Hippodrome Square. Luke and the Memorial founders Garry Jones, Phil Oldershaw and Andrew Bentley King will also be in attendance.

Students have designed the cloaks that participants who have contributed to the memorial will wear in a special parade before the major new monument will be shown to the public for the first time at 6pm.

The unveiling, which is open to the public, will be preceded by a church service at St Martin in the Bull Ring featuring readings, music, the lighting of candles and a performance from Birmingham Royal Ballet.

Find out more information about the event here.