Alumna writes her way to success 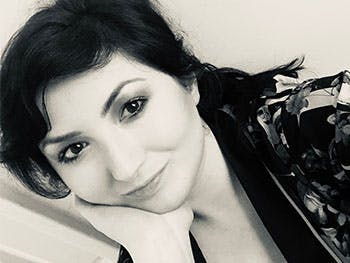 A BCU Alumna inspired by the concrete jungle on her doorstep will have her book of poetry published in 2022.

The graduate’s poetry will be published by Scotland-based publishers Blue Diode in May 2022 and will bring together over 20 poems which Olivia wrote during her time studying at BCU. Inspired by her Birmingham surroundings, Olivia took on the theme of ‘urban gothic’ for the book, which is titled ‘The Calls’.

She said: “Gothic literature normally takes place in castles and big stately homes in the wilderness and they tend to be around royal or aristocratic families.

“But I wanted to take that and put it in a contemporary urban setting, by taking myths and legends and putting them in the city. When you clear a forest to build houses, what happens to all the myths and legends? They have to go somewhere.

“So I’ve used the buildings and places around Birmingham and other UK and European cities, to create this idea of the human and the natural blending into one.

“I find a lot of inspiration in cities and in people. I wanted to tell a story or create a legend for somewhere that may be considered dull, boring and concrete that you’d just walk straight past.”

Since graduating from her Master’s degree in 2020, Olivia has enjoyed a variety of successes alongside being published, including being shortlisted at the Wolverhampton Literature Festival and having her poems published in a range of books, magazines and online publications.

She said: “Getting a poetry book published so early into my career and being so relatively young as well is amazing. It is a full collection too, rather than a pamphlet, which is such an honour.

“Having a book of poetry is a little scary but it’s a good scary, like when you first move away from home or start university. Suddenly I feel very visible, but it’s really exciting and I’m so overwhelmed and pleased with how it’s going. My family aren’t very creative and I am the first person in my family to have ever done something like having a published book, so they are very proud of me.”

It was her time as an undergraduate at BCU which inspired her to get into poetry. She said: “Originally, I wanted to write short fiction and in the second year of my BA I took two modules, Short Fiction and Poetry, with my focus being on the short fiction.

“But I adored the poetry module so much and what we were reading in contemporary poetry, like Ted Hughes and Liz Berry, I just thought this is absolutely fantastic and I’ve got to get involved. My tutor, Greg Leadbetter, really set something off in me. So in my final year, I took the advanced poetry module called ‘21st Century Poetry’ and I started to think seriously about it and how to hone in on my craft.”

In the future, Olivia hopes to release more of her work: “I want to continue to put out collections and pamphlets around different topics. I have ideas for another two books of poetry which will be a little more themed, with one being around my family tree. I’d love to do a PhD at BCU around poetry too in the future.”

The Calls will be available from May 2022 via Blue Diode Publishing.