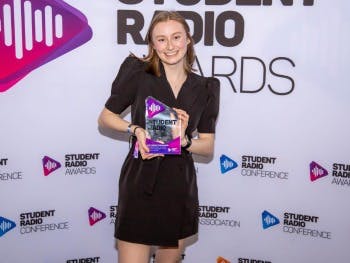 Kattiea Devereux-Ward, who graduated in July 2022, created her podcast ‘Women Behind the Wheel’ as a two-part documentary for her major project in her final year at BCU.

Women Behind the Wheel, which was broadcast on Scratch Radio, is about women in motorsports, highlighting the lack of diversity and the issues that women face in the industry, as well as showcasing the companies and people who are making positive changes.

Kattiea said: “I wanted the project to make a difference in the industry and start a discussion about the lack of women in motorsports, especially as there aren’t many media products on the topic.

“I intended to bring a platform to these issues and the stories fans and women in the industry have. Bringing these voices to life was a great first step in facing the gap in the industry. I wanted to show that motorsports is a career option for women, and that there’s a multitude of roles available.

"I also interviewed Christine GZ, a fellow BCU alumni, who let me sit in her Odyssey 21 Extreme E car."

After producing a demo and a written piece about the project, Kattiea submitted it to the Student Radio Awards, and last month, was told that she had been shortlisted.

She said: “Jack Carson, Scratch Radio's Station Manager last year was spamming my phone telling me to check the SRA's social media. I was so shocked, and it was such an honour and achievement to even be nominated, let alone win.”

The Student Radio Awards took place last week at Indigo at the O2 in London, where Kattiea was soon awarded Best Podcast Programming for Women Behind the Wheel.

Kattiea said: “I cannot explain how happy I was when they announced the winner! The whole evening was surreal, it was such an incredible experience.

“I am so grateful to BCU, BCUSU and Scratch for helping me on this journey. It was great chatting with other students from across the UK as well as industry professionals.”

But the project isn’t over for Kattiea, who is keen to continue talking about women in the motorsports industry.

She said: “The radio documentary is on Spotify and Anchor, and I continue to speak about these issues across Women Behind the Wheel's social media.

“I am going to continue talking about the latest issues and developments in the motorsports industry surrounding women in motorsport. It is a topic I feel very passionate about, and so I am hoping to build my platforms even more.”

Kattiea chose to study at BCU due to the radio facilities, and soon fell in love with presenting on the student station Scratch.

She said: “I chose to study at BCU because of all the amazing experiences that come along with it, for example, I was able to work at the Commonwealth Games as a Digital Clipper and go to Sky for two weeks on a Scholarship Placement.

“I absolutely loved living in Birmingham and studying at BCU. I chose the Media Production course because I love both TV and radio, and this course allowed me to develop my skills in both areas.

“Scratch Radio was my favourite thing about university. It helped me to develop my radio skills and confidence while also being a part of the society. Last year, I was the Assistant Station Director, which has given me so many new skills that are super helpful, especially when applying for jobs.

“I did some crazy but cool things whilst being in Scratch, such as going to Birmingham Pride and interviewing artists, going to Crufts, and also interviewing the Cast of Peaky Blinders at the premiere of the final season.

“I was a part of Scratch Radio for all three years of university and loved every second of it. I did two shows each week last year, which were so much fun. I have made lifelong friends because of it, and I am so grateful for the opportunity. The experiences I have had at Scratch will definitely help me in the future.”

After her award win, Kattiea now has lots of great advice to share with current students.

She said: “My best advice for current students, especially radio and TV students, is to take up every opportunity you can.

“Join student radio stations, such as Scratch, because it boosts your CV and is extremely fun. I look back at the various things I did over the past year with so much pride and honestly, some of it still doesn't seem real.

“If you want to interview someone or go to an event, reach out to people, and don't be afraid to ask because they might just say yes.”