Alumna lands role at soon to be launched ‘GB News’ 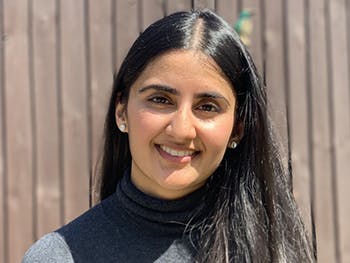 A Multiplatform and Mobile Journalism alumna is set to have her big break after scoring a job at the soon-to-be-launched news channel GB News.

Jazz Shergill, from Sutton Coldfield, studied at BCU from 2013 to 2016, where she completed a BA in Media and Communications, before returning to complete an MA in Multiplatform and Mobile Journalism in 2019.

Now, just three months after graduating, Jazz is moving to London to get started on her new career at GB News as a Journalist and Producer. The channel, due to launch later this year on Freeview, Sky, YouView, Freesat and Virgin Media, will offer a mix of news, opinion and debate.

Jazz said: “GB News will be the biggest news launch since Sky News. It won’t run typically how news channels are run in the UK, it will have more of an American style to it. They are going to discuss controversial topics, there will be breaking news as oppose to rolling news and will also have debate shows.

“The aim is to be representative of the UK as a whole, from all sorts of backgrounds and communities. That is really important to me, as someone from a South Asian background. I love to see diversity and inclusion in any industry, especially within media as I feel like there is a huge lack of representation.”

GB News has so far caused a stir in the media industry, with many high profile journalists moving to the new channel, including Chairman Andrew Neil, ITV’s Alistair Stewart and BCU Alumna Gloria De Piero.

After graduating in early 2021, Jazz found herself with plenty of opportunities to get involved with, and eventually took on a freelance position for Birmingham Live before landing her new role. She said: “I really didn’t think I’d get the job at GB News. My friend sent me the job advertisement, so I looked into it and thought ‘I won’t get that’ as I’m fresh off my master’s degree, but I chose to apply anyway.

“Four weeks passed and I just accepted that I wouldn’t get it, and then an email dropped in my inbox saying that they wanted to interview me. I couldn’t believe it! I went to the interview and got through to the next stage, and then had to speak to the CEO too. Within a week, I got offered the role.

“I wouldn’t have this job without my Master's and what I learned on the course, because it provided me with so many skills and the way that the course is ran with news days, the interviewers were really impressed with it all.”

With the move to London too, the role is an opportunity for Jazz to step out of her comfort zone: “My day to day will change on a daily basis. One half of my role will be as a journalist, where I’ll be finding stories and putting pieces together, and the other half of my role as a producer will see me behind the camera, producing many of the debate shows, news and features.

“I will be placed across many of the different shows, so that I can build relationships with all sorts of people and see how everything works, and then I’ll be placed into particular areas.

“I’m so excited to be working in this role. It’s scary, but I think it’s natural for me to feel a mixture of excitement and scared. I’m stepping out of my comfort zone and it’s something I need to do for me, especially with moving down to London by myself. I’ve never lived away from home before, but I’m so excited to get going with everything.”

Jazz puts her success down to the variety taught on both her undergraduate degree and Master’s. She said: “Going back to BCU to do my Master’s was the best decision I ever made. The MA course is everything a modern day journalist needs, and Paul Bradshaw and Diane Kemp are incredible. Journalism is not just going out with a pen and notepad anymore, you have to learn how to edit, operate a camera and even skills like shooting on a phone. I learned so many transferable skills that I wouldn’t have landed my new role without.”

Going forward, Jazz would like to move her focus into reporting: “In the future, I would love to travel as a journalist and eventually go into reporting. This job is a great stepping stone into the reporting side of things. I enjoy being behind the camera as well as in front of the camera, so I would love to make a documentary someday too. But for now, I’m really looking forward to just getting out there and meeting all kinds of people.”

GB News is set to be launched later this year.