A Labour of Love: Alumni open own store in city’s historic Jewellery Quarter

Chris and Bonnie Hay met whilst studying together for an MA in Jewellery and Related Products at BCU’s historic School of Jewellery back in 2010. 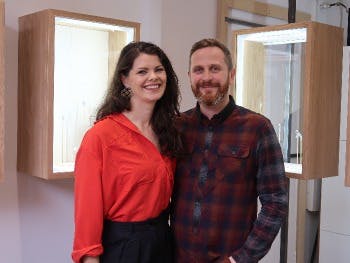 Bonnie, who is from Birmingham and recently starred on BBC Two’s All That Glitters, which was filmed at the School of Jewellery, soon fell for Chris thanks to their shared love of their chosen industry.

Chris, originally from Somerset, grew up around jewellery as his father had his own shop in Taunton. So, it wasn’t a surprise when Chris also chose to follow in his footsteps, and he soon enrolled onto an evening class in stone setting at the School of Jewellery in 2005.

This was followed by a HND in Jewellery and Silversmithing which he completed in 2008, a BA (Hons) in Jewellery which he graduated from in 2010, before additionally completing the Masters course in 2011.

After getting married in 2013 and settling in to married life at their home in Bearwood, the couple both found work at BCU. Bonnie currently works as a Senior Metal Technician and until recently, Chris worked as a Knowledge Transfer Technician at STEAMhouse, alongside raising their daughter who is now four years old.

It is their joint passion of jewellery, as well their desire to leave a legacy and build a future for their family, that has led the couple to open their very own store; Hay Fine Jewellery, based in the Jewellery Quarter. 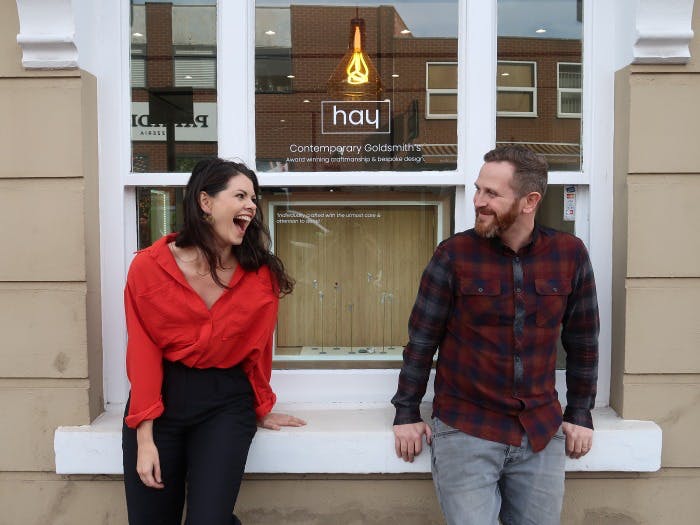 Bonnie said: “Opening our own shop was really important to us both. I think it's something that Chris really has in his blood. For years, he’s been itching to have a shop and a retail outlet, because he is a second-generation jeweller and retailer. He grew up around jewellery, and it has been his life ever since.”

Chris added: “As a little one, I was pushed into my father’s shop to greet customers. Now we've got a little girl, I love the notion of having a family business and being able to juggle family life.

“I ultimately think, and hope, that the shop will enable us to live a better life. Coming out of the pandemic, we were just suddenly inspired to go and do our own thing and see if we can make it work.”

The couple are keen to achieve great things at their new store, including offering something totally different to other shops in the area.

Bonnie said: “We originally thought that the Jewellery Quarter wouldn't have a premises that we could afford and that we would be priced out. It’s a real shame for many, as a lot of local talent just don’t get a foothold here. I've been part of the jewellery community for years now and there's so many jewellery designers and makers all in the back streets, crafting away.

“I've worked in lots of jewellery shops around here and it has become a lot more competitive with what is being sold, and the best deals. But it means that there just isn’t a lot of innovation anymore. 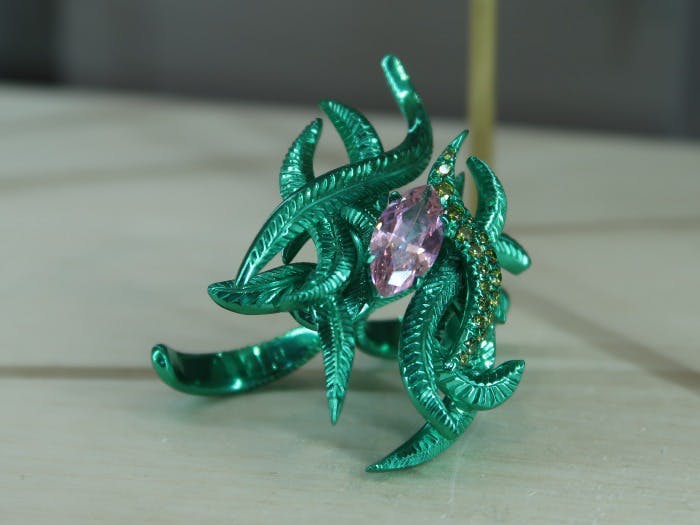 “Many shops in the Jewellery Quarter now all sell the same thing. But that’s where we want to come in. We want to individually craft pieces for our customers. There aren’t many places providing completely bespoke pieces anymore.

“We want our store to be the oasis and to be the difference that we would really love to see in the area. We plan to have lots of colourful items in the shop and push people's boundaries of what they would like as an engagement ring, a wedding band and more. It may be a high-risk strategy, but we just want to build things with meaning, and with real purpose.

“We will work with customers on understanding what their needs are and what they would like to get out of the process. We’ll then advise them on what could work best for each customer, from the design of the piece to the stone. That’s the difference with us, our jewellery is completely bespoke.”

Bonnie and Chris started to set up shop in their new premises on Warstone Lane back in August, and in just a few short months, they have totally transformed the space. 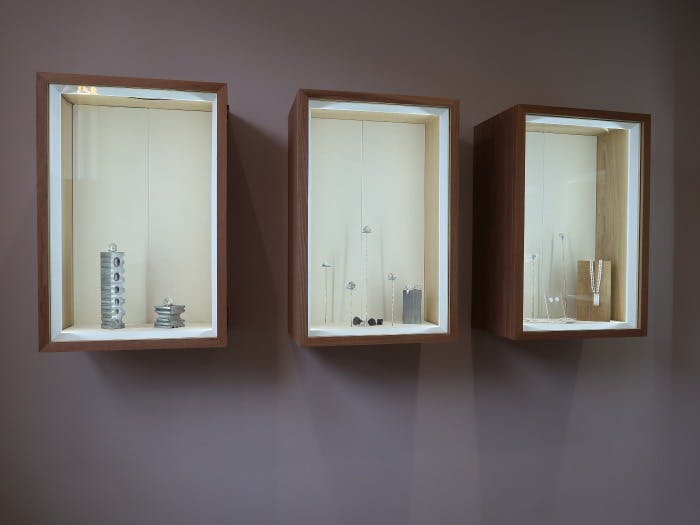 It was a labour of love for Bonnie and Chris, who ripped out the old shop and built everything new themselves; from replacing the ceiling and flooring to building the display cabinets and so much more.

Chris said: “That's one of the great things of my time working at STEAMhouse. Thanks to being in an interdisciplinary workshop, by the time I left, I had a massive range of skills to be able to put all of this together. We really enjoyed doing it too. It isn’t a big space, so we did a lot of research into making small spaces work well. It looks great, and it looks like ours.”

For the couple to decide to work together, it would only be for something that they both truly believe in.

But it is their decades worth of experience in the industry, as well as their total passion for it, which has built the road for them to be able to make such a huge step in their careers. 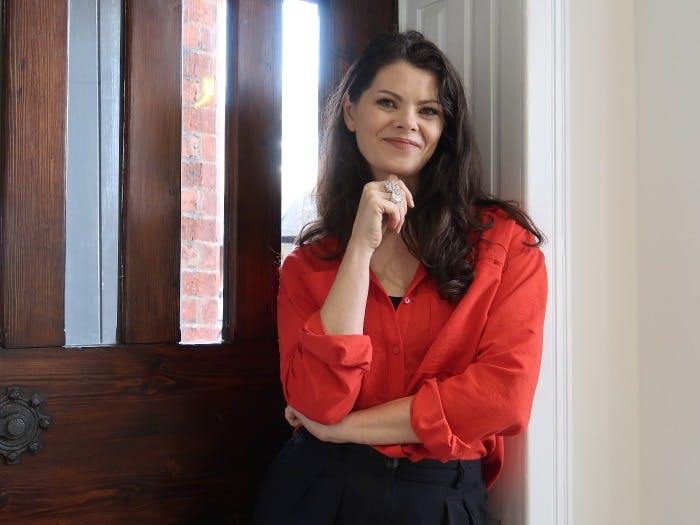 Bonnie said: “What I love the most about jewellery is the fact that it can be so sentimental. It can mark a spot in time. It's also just so nice for people to express themselves with jewellery.

“Growing up, I always thought that I was going to be a fashion designer. But now, I actually think that accessories win. You can have a plain style, but with the accessories, they just make an outfit.

“I think it's deep rooted within all of us to adorn ourselves, and to put beautiful items on ourselves too. Whether that is a family crest or a ring with initials on.” 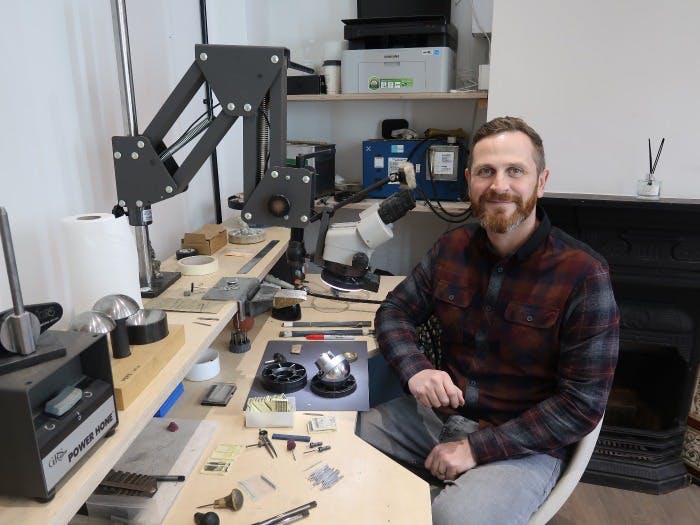 However, Chris’s relationship to jewellery can be one of both love and hate.

Chris said: “Well, I've got a confession. I don't like wearing jewellery that much. I think that's a funny thing to say being a jeweller, but what I love about it is the real calmness I get when I make jewellery.

“I love building those skills. I also really enjoy just being on my own and making things and working through tasks and solving problems. When I get into the creative flow, I just love being in that state of mind.”

Bonnie and Chris now have big hopes for the shop, with dreams of building a strong family business.

Chris said: “For me, it's about sustainability; it's about offering something different and then sustaining that. We're not looking to be millionaires. We’re not here to become super rich or anything. 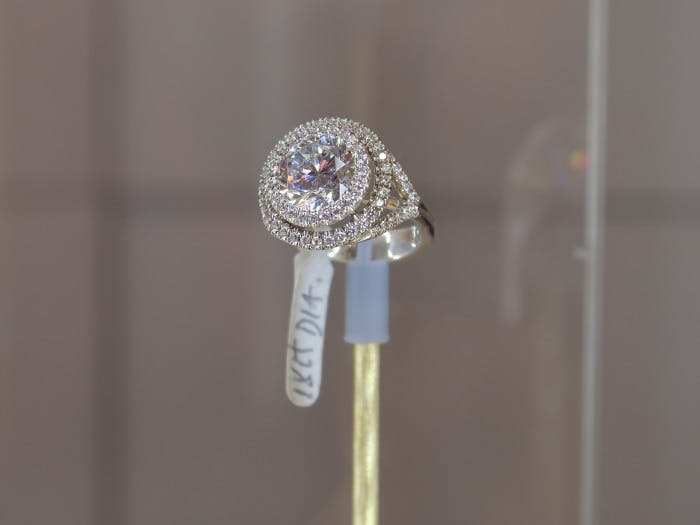 “It’s the small things that mean a lot to us. One day, we’d love to have our daughter involved, and be able to leave a legacy. We also want to make the space a real hub, and I’d love to eventually show others my making techniques too and be able to share those skills.”

But the couple agree that if it wasn’t for their valuable time spent at the School of Jewellery, they wouldn’t be in the position that they are in now.

Bonnie said: “The School of Jewellery gave us the skills to be where we are now. It formed the foundation of who we are and what we want, and without that, we just wouldn't have imagined doing this.

“Although our skills have developed since we've left the School, it gave us the starting point and the tools to be able to do what we want to achieve. 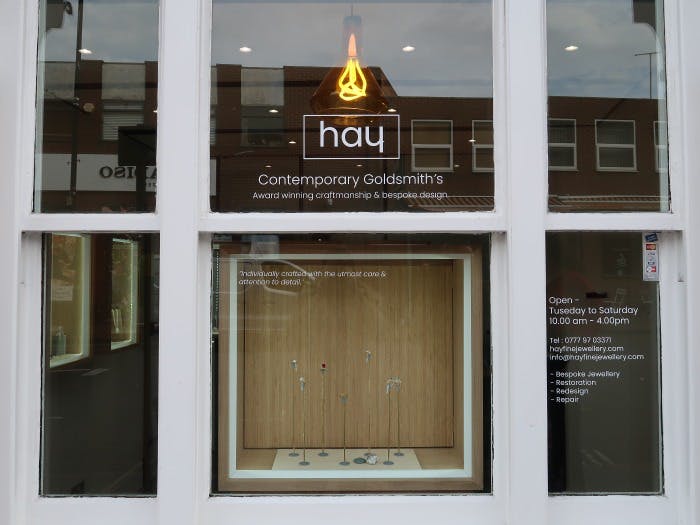 Chris agreed: “Being at university exposes you to incredible facilities and fantastic practices. You might join university and go in thinking you want to make engagement rings, but you end up with a much wider perspective of the industry.

“At the School of Jewellery, you get world class facilities and tutors and being amongst other jewellers is fantastic as well, because you have that sense of community.

“BCU has been absolutely fundamental in what we have achieved so far.”

Hay Fine Jewellery is now open at 7b Warstone Lane in the Jewellery Quarter.