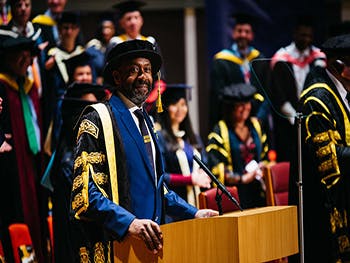 Sir Lenny was finally unmasked as the blue and purple googly-eyed monster on the Saturday night show, after a performance of ‘Addicted to Love’ by Robert Palmer following covers of Mark Ronson’s ‘Uptown Funk’, Cameo’s ‘Word Up’ and Pitbull’s ‘Hotel Room’ in previous episodes.

Prime-time programme The Masked Singer, which sees 12 mysterious celebrities dressed up in a range of costumes and performing under an alias to four judges, singer Rita Ora, television presenter Jonathan Ross, television presenter Davina McCall and comedian Mo Gilligan, is approaching the finale of its second series.

Before each performer takes to the stage, ‘clue packages’ show the masked individuals in various locations, speaking about themselves to offer clues as to their real identities.

A classroom location featured in ‘Blob’ clue packages has suggested the character is connected to teaching – a reference to national treasure Sir Lenny’s position as Chancellor of Birmingham City University.

In his own words, national treasure Sir Lenny accepted the role at BCU “because he believes passionately in education and the power of education to transform lives.”

Birmingham is a place full of opportunity. But we need to keep working to ensure that young people from all backgrounds have access to these opportunities regardless of which postcode they were born in or which school they went to.

Since taking up the post in July 2016, Sir Lenny has overseen a number of major initiatives and projects at the University, including officiating over graduation ceremonies, opening a £1.2 million education hub for young people in North Birmingham with IntoUniversity, and launching The Sir Lenny Henry Centre for Media Diversity, with the aim of examining representation across the industry including journalism, acting, film, TV and radio in both front-of-house and behind the scenes roles.

Other clues around the identity of the character have included Sir Lenny’s ‘distinctive voice’, musical clues, a reference to wearing glasses and clown red noses – a connection back to Comic Relief, of which Sir Lenny was a co-founder.