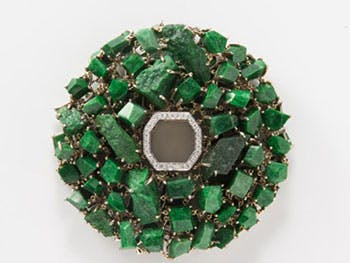 A group of international designers and graduates from Birmingham City University’s School of Jewellery are to return to the UK next month for a special exhibition exploring the symbolism of the ping’an pendant – a piece of jewellery containing the jade gemstone.

The ‘New Jade and East Meets West’ exhibition on 19 – 23 October will see ten Chinese jewellery graduates return to the School of Jewellery to showcase their own designs of the popular Chinese ping’an pendant.

In ancient times, the ping’an pendant was used in rituals to worship heaven, whilst symbolising inner peace and calmness.

“China has a long history of using jade to make the ping’an pendant and over thousands of years the pendant has become a very important cultural emblem”, said Yip Chan, exhibition curator and graduate from the School of Jewellery.

This exhibition has been three years in the making and we’ve even brought a traditional jade carver with us to create and showcase some extraordinary pieces of art.

Amongst those exhibiting include Ching-Tsi Tseng and Fangfang Qiao, who graduated from the School of Jewellery in 2010.

During her time studying at Birmingham City University, Fangfang picked up accolades at the Goldsmiths’ Craftmanship & Design Awards and the Weston Beamor Design Awards.

Since founding her own jewellery brand in 2013, Fangfang’s work has been featured on Chinese news channel CCTV and she is also a visiting lecturer at the Gemmological Institute at China University of Geosciences.

Jewellery pieces on display at the exhibition include ‘Love and Blossom’ by Ching-Chih Tseng and ‘Shadow Sees’ by Fangfang Qiao – showcasing the designers’ own take on the ping’an pendant.

“It is with great pleasure for me to welcome back this group of highly talented and successful graduates”, said Gaynor Andrews, Head of the School of Jewellery at Birmingham City University.

“We’re so proud to showcase their individual achievements since becoming our alumni and we’re delighted to host their exhibition as part of the School’s 125th anniversary celebrations.”