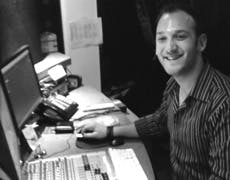 "It's a wonderful job - quite honestly something I never thought I would be doing at this stage - and I get to work with some fantastic people, see plenty of movies, binge on Pro Tools and meet celebrities!"

Just two months after graduating, Jason landed the kind of job he never expected so early in his career. He's an Audio/Visual Producer for a film PR company. And what a job! Producing audio and video press kits for new films released in the UK, he works with all the big names... Disney, Universal, Icon, Fox, Sony. He's recently been involved with putting together the press material for the Michael Jackson film, 'This Is It'.

So how did he land such an amazing job?

Jason puts it down to his invaluable placement at a radio commercial production company where he got plenty of experience in conducting ISDN radio interview sessions - something which features heavily in the studio management element of his role. "That's exactly what got me the job I have today," he says.

The placement gave him some fantastic studio experience - recording and directing voiceovers and independently editing, producing and mastering audio with key studio editing and sequencing software. "I was only one of three producers in the company, so I was thrown in at the deep end!" he explains. "Many of the voiceover artists were celebrities, which added to the pressure slightly!"

And the future? Jason's very happy developing new skills and taking on more responsibility where he is, gaining the experience to venture forward into the world of cinema, incorporating sound, music and ambient audio design for film. He's keen to take more advanced courses to stay ahead of the game - so we hope to see him again soon!