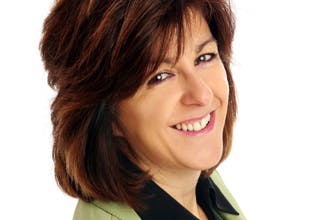 Tina Swani developed a successful career in the charity sector, recently retiring from her role as Chief Executive of Birmingham St Mary's Hospice. Before that, she was a Branch then Regional Director at the British Red Cross. She studied a Diploma in Management Studies (DMS) and a Master of Business Administration (MBA) at Birmingham City University, graduating in 1995.

Having held her role as Chief Executive from 2001 until retiring in 2020, Tina used her commercial acumen to oversee a huge increase in annual income, from £2million to £8million, raising more funds for the hospice’s vital work to reach more people, as well as growing the hospice reputation for specialist services. In addition, Tina has helped the hospice to enhance relationships with the areas it serves through the Compassionate Communities programme, which has resulted in advocates across 87 different community groups.

In 2015, Tina became chair of the Midlands Action Group for the National Transition Task Force, which brings organisations together to find new ways to support vulnerable young adults who have survived life-limiting conditions in childhood, and holds positions with a number of other local and national charities as her reputation in the field continues to grow.

“I wanted to step up into a more senior leadership role and I knew that, to reach the level I wanted, I would need a Masters’ degree. The DMS provided a good stepping stone, then the MBA opened a lot of doors and allowed me to apply for much more senior positions.

The course really helped me to understand the impact that we as individuals have on our teams. I liked that there was the chance to gain insight into a number of different sectors, both public and private, as well as opportunities for research trips and placements abroad. The DMS in particular had a lot of work in small groups, which was usefully challenging, and that was backed up by lectures, which again featured a wide range of contexts and examples.

“I’d been at my previous employer for 10 years and decided it was time to move on, so I looked for a new role and secured a position as Branch Director, and then Regional Director, at the British Red Cross. After four years, and having experienced working for a national organisation, I then wanted to move to a role where I could see the impact my work was having at a local level, and the Trustees of Birmingham St Mary’s Hospice were seeking a Chief Executive to do just that.

“What attracted me to the role, and what has kept me there for so long, are three main aspects: that, as a local organisation, every decision we make as a team has a visible impact on the whole community and a positive difference on the lives of individuals; that we have incredibly loyal support from volunteers who work alongside our skilled teams of staff; and that the hospice has opened up great opportunities to work with many different sectors – from corporate partners to hospitals and local authorities – and I’m still continuing to learn because I have contact with such a wide range of people. We now have a much bigger influence on end of life care through our Education and Research Centre, where we train health and social care professionals in many other organisations. This means we can share our expertise wider than our own delivery of hospice care, predominantly at a local level, although we’re building a national reputation as well in some areas, such as equality and diversity and information governance.

“We’ve also managed to grow our income significantly over the years and, just as importantly, get a healthy mix of revenue sources. So, in terms of commercial income, we had two shops when I started and we now have 15, and we’ve developed a much wider range of income streams to ensure ongoing financial stability. During the recession, when corporate funding decreased, we worked out ways to keep our corporate supporters connected, so for example some staff from these companies helped with things like painting or gardening. Many of these supporters are now raising money again for us as their Charity of the Year or even continuing to volunteer with us.

“We set up Compassionate Communities in 2008 and were one of the first hospices to do so. Again, it was about working with communities and individuals to raise awareness of how to better respond to people who were at the end of their life, or support neighbours who were dealing with bereavement, and helping these communities to develop and access the resources they needed.

“The theme of our strategy that has taken us here to 2020, is ‘hospicecare for all’, reaching more people, both directly and via other organisations that we have supported through the education and research programme, from care homes and hospitals to prisons. Despite being best known for the hospice building itself, most of our care is actually in people’s homes and we are also looking at setting up satellite centres, such as in GP surgeries, where we can deliver more choices and care closer to where people live.

“At the moment I’m also chair of a sheltered housing charity, a non-executive director of a housing association that has 6,000 homes, and a trustee of Hospice UK. We’re continuing to look to strengthen the national reputation of hospice by finding areas we can have impact not just at a local but a national level.

“A lot of what I learned on my course about the financial aspects of business is relevant today as a charity is a compassionate business, and we still have to market effectively, raise awareness and attract investment. All of these are business skills which I learned on the MBA, and am continuing to put into practice today but adapted for a changing world, for example with changes in technology.

“I was really delighted to learn I was an Alumni of the Year, it was really nice to have that recognition and if it gives the hospice more profile that’s great because it’s not just about me – everything I do is through the efforts of every individual in the organisation and all the people in the communities that support us. For me, it’s not just my achievement, it’s everybody’s, and I’m really proud of the progress we’ve made together and to have been part of it.“