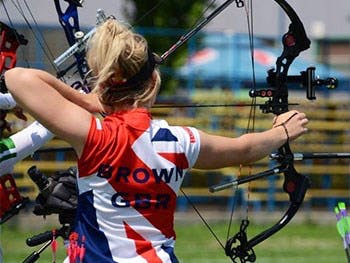 A 22-year-old female criminology graduate currently working with male offenders in a Lancashire prison has just arrived in South Korea to represent Great Britain at the World University Games.

Georgie Brown, who graduated with a first in Criminal Investigation from Birmingham City University last year will compete alongside over 10,000 participants from over 150 countries at the second largest multisport games in the world after the Olympics.

Her selection to join Team GB’s archery line up marks the culmination of a remarkable 12 months for Georgie, who on leaving university immediately started applying her criminology degree in a challenging role as a prison officer at HMP Buckley Hall, a men's prison in Rochdale.

"This is a great way of completing a great year, from leaving Birmingham City University to taking up a career working in a male prison, to competing for Team GB at a global level," said Georgie.

"After the pressure of my final exams and managing tough situations as a prison officer, competing in a sport I love will just be very exciting. I've represented Great Britain on many occasions but this will be the first multi-sport games so is extra special."

Georgie said her inspiration stems from her older sister Dani, a hugely successful Paralympic athlete, who won gold medals in Beijing and London, also in archery.

"I got into archery because of Dani. She's disabled but archery was a sport she could participate in, and being from an active family it was something we all got involved with."

"Many people worry about fitting sport in around their studies, but I'm proof that it can be done and I think most people will find that their university or college are really supportive. Birmingham City University was a great support to me and encouraged me to go on to pursue my dream."

The World University Games take place in South Korea from 3 to 14 July. Georgie arrived in South Korea today in preparation for the start of the games. Her first competition takes place on Saturday 4 July and if successful she'll go on to compete in the knockout rounds later next week.