Work begins on regeneration of site at Birmingham’s Eastside 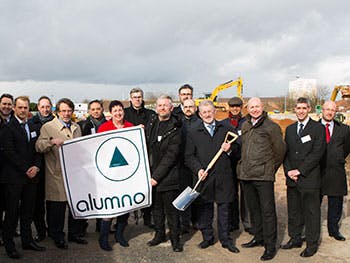 An official ground-breaking ceremony kick-started work on the £48 million project which will see the revitalisation of wasteland alongside the canal into 659 student rooms, forming part of the University's rapidly developing city centre campus.

Hosted by Birmingham City University and specialist student housing company Alumno Developments, the Eastside launch marked the start of the project, expected to be completed by September 2016. Together with accommodation, the development will include ground floor retail space and dedicated business enterprise units, serving student residents and offering affordable office facilities for graduates and the local community.

Commenting on the development, Birmingham City University Pro-Vice Chancellor Professor Fiona Church said: "We are delighted to be part of this landmark development here at Eastside which not only supports the University's City Centre development plan, but also contributes to the regeneration of the area.

"This is an exciting time for the University, with the new Curzon building set to open later this year and plans in motion for the new Birmingham Conservatoire – which will be the first complete new build Conservatoire in the UK since 1987. This development will mean that students can live and study in the heart of the city, with all amenities right on their doorstep."

Alumno's managing director, David Campbell said: "We are creating a vibrant new public realm through the opening up of the largely redundant canal side. This follows Birmingham City Council's Eastside Locks master plan which focuses on generating further investment in the city. No1 City Locks provides the perfect opportunity to turn a part of that vision into a reality, and we are delighted to be partnering with Birmingham City University to deliver a significant development which supports the University's growth agenda."

Find out more about student accommodation