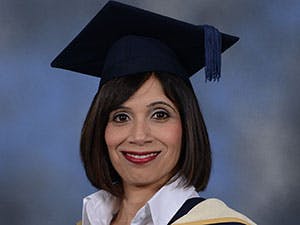 A nurse from Birmingham Children’s Hospital who has been recognised for her work in the South Asian community was honoured this week at a University graduation ceremony.

Raj Jhamat completed a BSc Dimensions in Health Care degree in 2012, and has since gone on to win a Jubilee Award 2014, Nursing Standard Award 2013, Queen’s Nurse Award 2013 as well as recognition at the Nursing Times Awards 2012 and the British Indian Awards 2014.

Raj has dedicated her career to the field of learning disabilities and palliative care and currently works as a Learning Disability Liaison Nurse at Birmingham Children’s Hospital.

Raj was crowned as one of Birmingham City University’s Alumni of the Year in the ‘Community Engagement and Leadership’ category, earlier this week.

Raj said: “For me, the recognition I have received from various people, including past tutors at Birmingham City University, is an acknowledgement that I am doing my job right and reinforced that I’m on the right track and using the right approaches to make a positive difference for patients.”

Raj has received national recognition for her work in helping Birmingham’s South Asian communities develop a better understanding of learning disabilities. This work culminated in Raj producing a DVD in Punjabi, which made use of local patient’s experiences, as well as detailing the causes of each condition, and the needs of children dealing with learning disabilities.

“There is a lack of education and support to South Asian families in the UK, with some families often isolated from their extended families and communities. I believe it’s crucial that more DVDs in this form are made, covering various subjects such as epilepsy.”

Raj still works with Birmingham City University and helps to deliver training on equality and diversity in courses aligned to the field of learning disability.