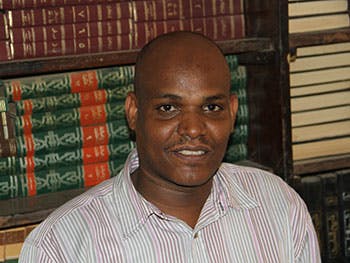 An international lawyer who attracted widespread acclaim for his work protecting human rights is to be honoured as Birmingham City University’s Alumni of the Year next month.

Elshareef Ali Mohammed graduated from the University in 2013 with a degree in International Human Rights and hit the headlines last year when representing Meriam Ibrahim, a Sudanese woman who was sentenced to death because of her Christian faith.

I am very grateful and humbled to receive this award - recognition that will encourage me to continue to enhance human rights in Sudan.

“I was very surprised by the response we had for Meriam as her case had been ongoing for quite a while. There were two sides to my involvement – the legal side, representing her before the court, but just as importantly, campaigning and raising awareness.

“When we started to receive more interest in the USA, UK and Europe, it helped to put pressure on the Sudanese government and helped Meriam to stay strong knowing that people around the world were supporting her.”

Following an international outcry, Meriam was later freed and allowed to join her husband in the USA.

Elshareef now supports a joint programme between Birmingham City University’s School of Law and the Sudanese Human Rights Initiative to promote freedom of religion in the country, which involves training lawyers and the judiciary, as well as facilitating cultural change.

“Many lawyers are blacklisted by the government but I will not give up and will continue to raise these issues, and bring about change in the proper way.”

Elshareef’s award ceremony takes place on the afternoon of Tuesday 1 September at Birmingham’s Symphony Hall. His award will be presented alongside students graduating from the University’s Faculty of Business, Law & Social Sciences.