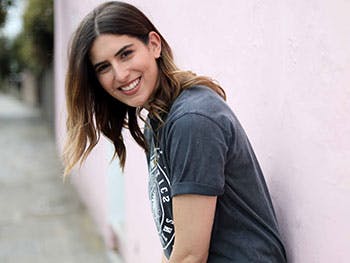 An award-winning blogger racking up over a million YouTube views a month is to be honoured by Birmingham City University next month.

Beauty and lifestyle blogger and ‘vlogger’, Lily Pebbles, will receive an Alumni of the Year award at the University’s graduation ceremony on Tuesday 9 January, alongside students about to embark on careers in business, law and social sciences.

The Alumni of the Year award recognises and celebrates the achievements of graduates making a difference across the globe, with previous recipients including singer-songwriter Laura Mvula and designer Jack Row.

29-year-old Lily Pebbles graduated from Birmingham City University in 2010 with a degree in Marketing, Advertising and PR, which is when she first began her beauty blog.

“I started my blog in a digital marketing module during the third year of my degree and initially it was just a hobby”, said Lily.

“At first it was just about finding my feet and getting into the swing of photo taking and writing, but then I started to really work on engaging on my social media channels. Only 30 people read my blog in its first year!”

In 2012 Lily decided to quit her marketing job working for a beauty box subscription company to focus on her blog full-time.

Today Lily collaborates regularly with global brands, including Revlon and Evian, and has over 400,000 subscribers to her YouTube channel which she updates twice a week with new videos.

“Over the years my content has changed but it’s always just been an extension of my personality so as I grow and change, my content does too”, said Lily.

“These days it’s more ‘lifestyle’ and I do a lot of vlogs which can cover anything from beauty to home décor to food, or just general London life.”

Lily has won awards from InStyle magazine and Johnson & Johnson for her online work and recently announced that she’ll be releasing a book in 2018 focusing on female friendships.

On receiving the Alumni of the Year honour from Birmingham City University, Lily said: “It’s completely insane and doesn’t quite feel real.

I feel really honoured and thankful as the University has done so much for me. When I told my A Level drama teacher that I was thinking of applying to university she laughed at the idea, so getting into university and getting a first was a huge life achievement for me.

“I started my blog at university and I met my husband there, so I don’t even want to think what my life would be like if I hadn’t ignored my drama teacher!”