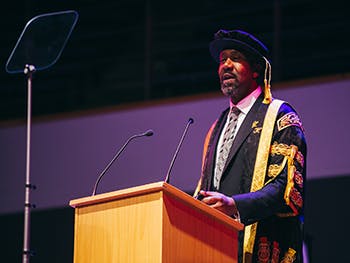 New academic and industry journal Representology, which explores diversity in media, will be introduced by Sir Lenny Henry, Chancellor of Birmingham City University in a collaborative event with Cardiff University.

The editorial board of the tri-annual publication, dedicated to research and best-practice perspectives on how to make the media more representative of all sections of society, will join for an event on Tuesday 30 March.

Hosted by co-founders Professor Diane Kemp (Birmingham City University) and Dr David Dunkley Gyimah (Cardiff University), the hour-long event is open to academics, media professionals and members of the public interested in diversity in the media.

This will be followed by a panel discussion on media diversity. Questions from the audience will be invited during the event.

The journal is edited by critic K Biswas who has written for a number of publications including the New Statesman, the New York Times, and the Times Literary Supplement. Alongside Rebecca Omonira-Oyekanmi and Amy Hall, he co-founded The Race Beat, a network for journalists of colour working in the UK, and is a director of Resonance FM, Europe's largest community radio station.

I'm delighted to launch Representology which brings together figures at the heart of the British media with leading academic specialists. At a time when established platforms indicate a wish to address historic imbalances within their organisations, our journal will bring to light important facts about diversity in Britain and help practitioners create a media that reflects the richness of every part of society.
K Biswas

Launched as a joint initiative between Birmingham City University and Cardiff University, Representology will analyse and work with all areas of media production, commissioning new research and opening meaningful conversations on how to dismantle existing barriers to participation.

Professor Diane Kemp, director of the Sir Lenny Henry Centre for Media Diversity at Birmingham City University and co-founder and co-director of Representology, said: "We wanted to create a journal that bridged a gap which seems to exist between great academic research and the media industry. We think it can be closed by access and language, so we made it a free download with research written for a wider readership and where well-sourced items by scholars and media insiders have equal value with editors.”

Fellow Representology co-founder Dr David Dunkley Gyimah, based at Cardiff University’s School of Journalism, Media and Culture, said: "This feels like a moment. There's a dearth of journals that cater for people with protected characteristics and provide a platform for the full richness and spectrum of Black and brown people's experience inside the media and academia. The net effect of a journal like Representology is to support and enhance wellbeing and the wider community. I'm happy too we're innovating in this space fusing ideas towards a contemporary hybrid journal and how this has all been made possible by the selfless collaborative efforts at all levels from Birmingham City University, its Sir Lenny Henry Centre for Media Diversity, and Cardiff University."

The first issue features Sir Lenny Henry and historian-broadcaster David Olusoga talking frankly about race and stereotyping in the television industry, Charlene White’s thoughts on fusing together current affairs and children’s programming for ‘IRL with Team Charlene’, and Dr Peter Block and Emma Butt unveiling their original academic research on the systemic lack of diversity in broadcast regulation and post-production sound recording.

The Sir Lenny Henry Centre for Media Diversity is a newly established research centre, bringing together the expertise of established media professionals and academics.

The Centre believes that accurate representation of all sections of society in all layers of the UK media is vital. Involved in the Centre are Sir Lenny Henry, Professor Diane Kemp (the Centre's director), Marcus Ryder MBE and Marverine Duffy, all leading figures in the efforts to increase diversity and inclusion in the UK media industry.