Sir Lenny Henry tells class of 2017 “in moments of great change, there are always opportunities” 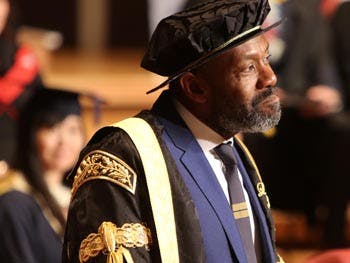 Sir Lenny Henry has presided over his first graduation ceremony as Chancellor of Birmingham City University.

Wearing ceremonial robes, the actor, writer, comedian and charitable campaigner addressed over 1,000 graduands from the University’s Faculty of Arts, Design and Media at a ceremony in Symphony Hall, Birmingham.

In his inaugural graduation speech, Sir Lenny Henry said: “We live in uncertain political times, but in moments of great change, there are always opportunities.

I hope that the skills, capabilities and knowledge with which you are all now equipped will enable you to seize on these opportunities; to create new jobs, new types of jobs and to build a new future for all of us, as your career and personal development goes forward.
Sir Lenny Henry

"This really is your time – so go ahead and change it.”

During his speech to the graduating class of 2017 on Monday 24 July, Sir Lenny Henry also said:

“Each and every one of you graduating today has shown dedication and personal commitment to be here. You stand at the threshold of the next chapter of your lives and what a fantastic way to begin. You should be proud of what you have achieved and you should be proud of Birmingham City University.

“I know how hard you have had to work because I have been there myself – the late nights, the early mornings and three thousand episodes of ‘Bargain Hunt’.”

Sir Lenny Henry also presided over the graduation ceremony for students from the University’s Faculty of Health, Education and Life Sciences on Tuesday 25 July.

As Chancellor, the Dudley-born star has made several visits to the University’s City Centre Campus where he has seen for himself how the institution opens doors to the creative arts for young people from a range of backgrounds.

Earlier this month, Sir Lenny launched a new networking group for the University in London. ‘BCU in London’ is open to graduates of the University – from senior leaders and up-and-coming professionals – who are based or have business interests in the capital.

In particular, Sir Lenny has taken on the role of Chancellor to pursue three passions; Birmingham and the West Midlands, the creative arts and giving life changing opportunities to young people from a wide range of backgrounds.