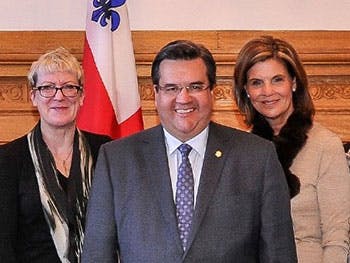 Kathryn Moore, professor at Birmingham City University’s School of Architecture recently paid a visit to Canada alongside leading international figures to start preparing for discussions on the 2017 World Summit and Congress.

The event will involve major organisations from design, planning and landscape architecture and is scheduled to take place in Montreal, October 2017.

The committee got under way on March 24 and also included an invitation to sign the Montreal Guest Book at the City Hall in the presence of Denis Coderre, Mayor of Montreal and Manon Gauthier, the Montreal Executive Committee Member responsible for Culture, Heritage, Design, Espace pour la Vie and Status of Women. Kathryn said:

"The meeting in Montreal was a momentous event, the beginning of the shaping and planning of a great international summit to celebrate design in its widest sense.

"It is a real honour for IFLA to be one of the primary partners of the organisation and a great opportunity for Faculty of Arts, Design and Media, Birmingham City University and the City of Birmingham to be associated with such a prestigious undertaking."

Advancing the role of design professionals

World issues will be addressed at the Montreal 2017 World Summit, including dynamic population evolution, coping with climate change and creating smart and innovative cities.

More information and discussions on the 2017 World Summit can be found on the official Facebook page.