It’s a first! Student marries and graduates – on the same day 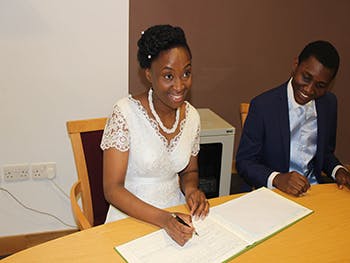 There’s been a double celebration for a Birmingham City University student, as she has married and graduated with a first-class degree on the same day.

Anu Yusuf, aged 26, received her Law LLB in a ceremony at Symphony Hall alongside hundreds of her fellow students on Wednesday 27 July, wearing a traditional cap and gown. However, merely hours before, Nigeria-born Anu was dressed all in white, as she tied the knot at Birmingham Register Office.

Anu and her now husband – Joseph Kolawole Ola, aged 27 – met four years ago in Gombe while working as part of Nigeria’s National Youth Service Corps (NYSC), and their subsequent engagement was prolonged as a result of her coming to study in the UK.

My husband often joked that he would whisk me away after my graduation to marry me because he can no longer wait. So, we decided to marry on my actual graduation day!
Anu Yusuf

“Romance aside, it certainly worked well logistically too, as it meant that our relatives only had to travel once for both occasions. We both have family all over the UK and we were conscious of taking up too much of their time and for all the added expense in making the same journey twice.”

Anu and Joseph’s wedding started at 10:40am with a civil ceremony at Birmingham Register Office. Following the official wedding photography, the entire party headed for a midday blessing at Anu’s church, VBCI Treasure Sanctuary, located at Perry Barr Methodist Church, north of the City.

The service finished at 1pm and all 50 guests were provided with take-away meals packaged up in gift bags. The wedding party enjoyed a traditional Nigerian meal on-the-go, including jollof rice with chicken served with salad, along with gizdodo (gizzard and plantain), moi moi (made from black-eyed peas), and poundo yam with vegetable soup.

All meals were prepared by friends and members of Anu’s church, and drinks were brought by her husband’s pastor from Liverpool, whose wife also made their cake.

“My husband and I created a notepad with our names on the front as a ‘thank you’ present for our guests to go in to all the gift bags, so along with all the food, the bags were quite bulky!” 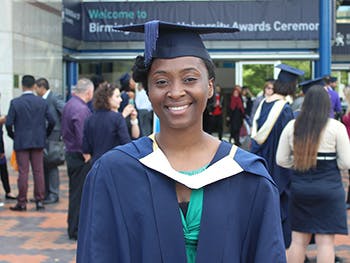 Following a bite to eat, Anu quickly changed from her wedding dress in to another outfit and headed back in to Birmingham city centre for 2pm to collect her cap and gown before receiving her first-class degree.

Half of the wedding party accompanied Anu to Symphony Hall, although she was only allowed the maximum four guests into the actual ceremony, including her husband and two uncles, who were both wedding witnesses. Family members unable to sit inside the actual hall remained outside where they finally had time to enjoy the take-away wedding meal.

By 5pm, the graduation ceremony had come to a close and all Anu and Joseph’s guests were on their way home.

“I’d be lying if I was say it wasn’t a relief to get to the end of the day, but I wouldn’t have changed it for the world. It was so special to have my family and friends present for not one, but two of the most significant milestones in my life, and being able to share it with them all is something that I will treasure forever.”

As well as her Law degree, Anu has supported her studies with part-time work at Birmingham City University, including a role most recently in the International Office there as a Marketing and Communications Assistant.

Parmila Murria is Assistant Director in Birmingham City University’s International Office. She said that Anu was at work just two days before her wedding, so her team gave her a suitable send off.

“Because she was so far away from her friends and family, and had little time to get everything ready, we decided to ease her nerves and have a little celebration of our own. We surprised her with a traditional English afternoon tea, complete with cucumber sandwiches and little cakes.

None of us could quite believe that two days later she would be getting married and graduating all on the same day, but we were so happy for her and are really proud.
Parmila Murria

Anu hopes to further her studies by embarking on a PhD in Law and her husband is studying in Bradford at LIFE Church College.