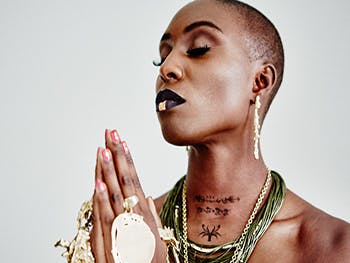 Laura Mvula, the acclaimed British singer and composer, will receive an honorary doctorate from Birmingham City University at a ceremony this month, marking her outstanding contribution to music.

The Royal Birmingham Conservatoire composition graduate and city native is set to receive the honour from he University’s Chancellor and fellow Midlander Sir Lenny Henry before an audience of music and art graduands at Birmingham’s Symphony Hall on Tuesday 23 July (from 2.30pm).

Speaking ahead of the ceremony, Laura said:

I'm humbled and delighted to be receiving such an immense honour. From primary school through to Conservatoire studies, Birmingham - with its richness and diversity - was the soil in which the seeds of my formative years of music were sown. The Conservatoire gave me the tools and confidence to experiment and express myself. It's incredible to think that from this wonderfully inspiring place, so many amazing opportunities have been mine and I have developed into the artist I am today - and am still growing. I'm so grateful.

Recognised as one of the brightest musical talents to emerge from the city in recent years, following a place on the Brits Critic’s Choice Award shortlist Laura achieved mainstream global success in 2013 with the release of breakout single ‘Green Garden’ and debut album 'Sing to the Moon' that year, landing her first of two Mercury Prize nominations.