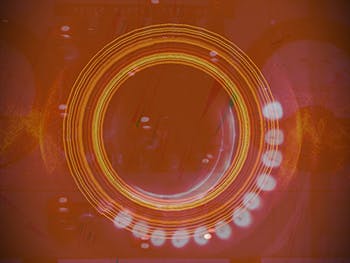 As a major showcase for contemporary art across the West Midlands opens this week, Birmingham Conservatoire alumnus Matt Parker will be the only artist exhibiting across all four participating venues.

Matt’s audio-visual installation, ‘The Imitation Archive’, traces the history of digital technology from the early computer Colossus at The National Museum of Computing at Bletchley Park to the Cloud technology of today. The audio for this artwork was mastered at Birmingham Conservatoire, part of Birmingham City University.

‘The Imitation Archive’ is 34 minutes of computer glitch, crunch, hiss and whir that commemorates 70 years of computing, produced at its birthplace – Bletchley Park, near Milton Keynes. The specially made audio-visual edition of the work on display at the West Midlands showcase takes a forensic approach to understanding the mechanics, history and analysis of computers in the UK, visualising the audible properties of The National Museum of Computing’s collection.

A significant feature within Matt’s work is the sound of the WITCH computer, the world’s oldest working digital computer and named after it being located in Wolverhampton for many years, (WITCH: Wolverhampton Instrument for Teaching Computing from Harwell). The WITCH is today housed in The National Museum of Computing at Bletchley Park, home to the World War II code breakers, and where Matt was recently artist-in-residence, with support from Arts Council England’s Grants for the Arts scheme.

As an audio-visual composer and sound designer, Matt finds inspiration in creating revealing and amplifying hidden connections between everyday technology and our environment.

I think the biggest challenge for me was to make something that I enjoyed listening to, that I felt carried some of the emotions of the history of certain objects, particularly those that reflected the intensity and stifling conditions of working in Block H with Colossus or in a room where 20 bombes were in constant operation by the women engineers (WRENS) who worked there
Matt Parker

“The support in kind I received from Birmingham Conservatoire allowed me to have the best microphones to capture the space and a great environment in the mastering studio to finish off my work.”

“It is exciting to see just how much New Art West Midlands has grown over the last four years and to be working again with our partners. There is a diverse range of talent and work coming out of our art schools and universities in the West Midlands.

“New Art West Midlands provides an important opportunity at a crucial point in the careers of these artists, enabling them to have their work displayed in highly respected galleries and to be seen and enjoyed by a wide public.”

Matt’s next major project will see him survey the physical locations of ‘the Cloud’ and how our digital data is stored. He will be capturing the unique acoustic footprint of the internet as part of a feature-length documentary. Matt added:;

“It aims to highlight the fact that whilst our smartphones sit silently on our dresser tables as we sleep, somewhere in the world a physical hive of noise, cables and chaos maintains our ‘digital selves’, with real analogue consequences to the surrounding environment.”

Since graduating from Birmingham Conservatoire, Matt has worked on various commercial assignments with clients such as Johnson and Johnson, Santander, Science Museum, London and Victoria and Albert Museum. His work ‘The Cloud is More Than Air and Water’, produced at Birmingham City University, was shortlisted for the Aesthetica International Art Prize 2015.

Matt has also released two critically acclaimed albums as part of the electronic band NEDRY, touring the UK, Europe, Japan and the US, including major festivals such as Sonar, Roskilde, Latitude, Airwaves and South by Southwest.