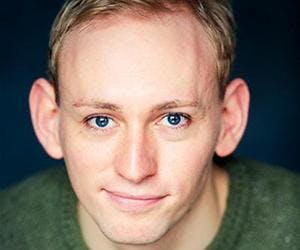 Banana is part of a trilogy of dramas; Cucumber, Banana and Tofu, about gay life in Manchester. Currently being broadcast by Channel 4, E4 and 4OD, they are created by Russell T Davies, who brought gay storylines into the mainstream in the 90s with Queer as Folk, before reviving Doctor Who in 2005 after a sixteen year hiatus.

Alex plays the role of Frank, a young farmer visiting Manchester on a night out. His character features as a lead role in Episode 7 of Banana on E4, airing on Thursday 5 March, and also makes an appearance in Episode 8 of Cucumber on Channel 4 on Thursday 12 March.

Originally from Staffordshire, Alex graduated from BSA in 2012. While studying at the University, he appeared in Shakespeare’s A Midsummer Night’s Dream, Ostrovsky’s A Family Affair and Wilde’s A Woman of No Importance. Banana and Cucumber are his first TV roles.

Alex enjoyed his time working on Banana and is looking forward to it being broadcast. He says: “I was privileged to join such a great series and had the most wonderful time.

“The stories are full of heart with real truth. Gay or straight, I think people will identify with our story. I hope everyone enjoys it as much as I did.”