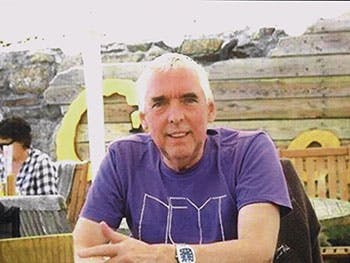 A group of acting students recently took part in the Simplyhealth Great Birmingham 10k, running in memory of an academic who both created and taught them on the Foundation in Acting Course at Birmingham Conservatoire.

The quintet originally met as students on the institution’s Foundation Course in Acting, where they were taught by the late David Vann.

Working as an actor, director and tutor throughout his career, David believed in making the arts accessible to people of all different backgrounds and upbringings. Following his passing in 2014, the David Vann Bursary was set up in his honour to help students who couldn’t otherwise afford to enrol on to the Foundation programme.

The five students joined around 8,000 other runners on Sunday 30 April for the Great Birmingham 10k, where they hoped to raise £600 for the David Vann Bursary. They actually raised much more!

We've just about recovered!  It was a tough run but knowing we were doing it for such a great cause is what got us through. We're very happy the training paid off as we all managed to finish around the times we were hoping. I have to say we're feeling very proud of ourselves and know David would be too.  We're over the moon that we've managed to raise over £1000!  We're just short of £1200 at the moment, with a few days left on our just giving page. 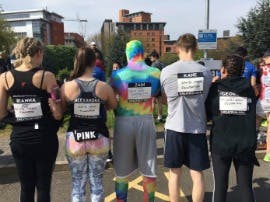 The Foundation Course in Acting at Birmingham City University, gives students a broad base in performance techniques and methods, invaluable to anyone wanting to go to drama school or take up a place on a performance course at university. It is also available to those who want to expand their experience in acting before applying. Former students have gone on to train at a variety of drama schools in the UK and in the USA.

However, the Foundation Course in Acting does not qualify for government funding for fees or living expenses, which can prove a significant barrier for prospective students. Therefore, the David Vann Bursary has offered valuable financial support for budding actors at Birmingham City University.

"We all feel that the foundation course benefited us greatly; it allowed us to experience life at a drama school – as it's very different to a lot of other courses in further education – and showed the five of us that acting was definitely what we wanted to pursue. It also gave us the confidence to audition with ease and get a better understanding of our casting.

We've decided to do this run to give something back to Birmingham Conservatoire but also to honour David’s legacy – we wouldn't be here if it wasn't for him. I remember coming to the open day and David gave the course talk; he was so inspiring and his passion for theatre and love for sharing his knowledge among students shone through – he made me want to come here!

"As we were in David’s final cohort, we'd like this to become a yearly tradition, whereby the third year BA Acting students who once were on the foundation course do a big fundraising event. We all had such a great time on the Foundation course that we want to be able to give that opportunity to someone who can't fund the programme fully by themselves.” 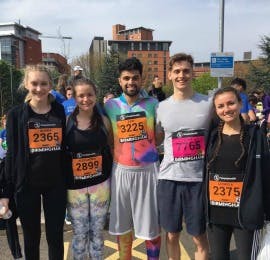 Celebrating its 80th anniversary last year, Birmingham School of Acting became part of Birmingham Conservatoire in 2017. Comprising 11 studios, including a large performance studio, the Conservatoire has set a new benchmark for drama training facilities in the UK.

We spoke to Danièle Sanderson, Deputy Head of Acting at Birmingham Conservatoire before the race who said:

"Our students are very proud of their school, no more so than foundation students who make the choice to stay with us for four years of study. For these foundation students who knew and were taught by David, raising money for the bursary award which was set up in his name to assist them with fees is their way of honouring the man that supported them through their early studies, and in gaining their place on the BA Acting course.

"I'm very proud of them and slightly in awe of them running 10k on Sunday. We wish them the best of luck and hope many people will be at the race to cheer them over the finish line!"

Birmingham Conservatoire was also represented in the Great Birmingham 10k by world record breaking Music student, Alistair Rutherford. In Liverpool earlier this month, Alistair smashed a Guinness World Record when he ran the fastest half marathon dressed as a musical instrument, and he once again donned his custom-made viola costume for the Birmingham event on 30th April.