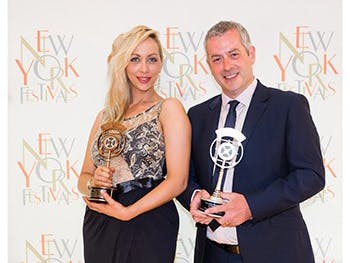 These awards are seen as the Oscars of the radio industry, recognizing the world’s best work in radio production This year 27 countries took part, and unlike Eurovision, the UK topped the leader board including gold, silver and bronze trophies for Birmingham.

Bringing home gold is former Postgraduate Diploma Broadcast Journalism student James Bovill. James was awarded gold in the Best News Documentary category for his programme ‘The Birmingham Pub Bombings 40 Years On’. Made for BBC WM and presented by BBC WM and 5 Live journalist Adrian Goldberg, the programme was broadcast in November on the 40 anniversary of the IRA attack.

James said: “I’m incredibly proud of this documentary. It seems to have had a profound impact on everyone who’s listened to it, and the recognition it’s received is testament to the amazing people I met who told their story of that tragic night in 1974, many for the first time.  I couldn’t have made this documentary without the help of my co-producer Mark Newman, who’s a creative genius, and Adrian Goldberg, who gave it the impact it deserved. I hope it does the 21 people who died, and 182 injured that night justice.”

A silver award for the Best Student Radio Station went to Scratch, the University’s student radio station. This follows the station’s success in winning the Midlands category of the 2014 UK Radio Academy’s Nations and Regions Awards.

Neil Hollins, Birmingham City University radio lecturer commented: “It is fantastic to see students getting recognition for their work on Scratch Radio. Getting involved in the station offers them a very meaningful opportunity to develop their production and presentation skills as well as learning about station management. I'm proud to be able to pick up this award on their behalf.”

In two raw and uncompromising productions, Emma investigated the realities of excessive student drinking and recreational drug taking and pulled no punches with this gritty series.

Emma said: “I feel incredibly privileged to have my work recognised by the New York Festivals and I certainly would not have received this honour without the guidance of my former BCU teachers.

“I greatly appreciate the support of the University to enable me to travel to New York to collect the award as an ambassador of Birmingham School of Media. This is a milestone achievement on my CV and will undoubtedly highlight my capabilities as a media professional to future employers.”

This was the first year the NYF awards have awarded prizes in a new series of student radio categories. Rose Anderson, Executive Director of the New York Festivals, believes that these new categories are a valuable way for students to gain confidence in their abilities and enhance their employability.

Rose said: “One of the things that we feel very strongly about is the importance of having student work judged by the same Grand Jury members as professional created submissions. So, in this regard, student work is being listened to by award winning radio professionals around the world, which is a nice validation, I think, of the art form of radio”.