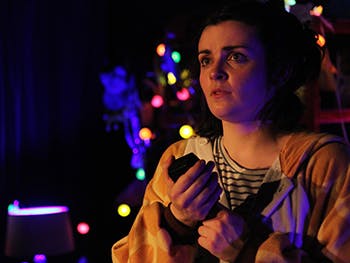 A theatre company formed by three graduates from Birmingham School of Acting has been nominated for the National Student Drama Festival (NSDF) 2017 Edinburgh Award.

In 2016, the Birmingham students created Theatre63 – which now boasts a strong collective of eight alumni – and they all continue to strive to complete their original and ultimate goal of performing 63 shows.

The NSDF award recognises the créme de la créme of emerging theatre companies and has shortlisted 20 performances from this year’s Edinburgh Festival Fringe programme, including Theatre63’s latest show. All shortlisted productions must be brand new – new writing, new devised theatre, a new adaptation or an innovative reworking of a film or a play.

Being Shortlisted for the NSDF Award is an exciting accomplishment. The Fringe Festival has allowed us to meet other companies and we are able to learn and develop our skills in a place that is so open and passionate about new work.
Theatre63 producer and performer, George Alex Pollard

Theatre63 are performing ‘Cockroached’ at Pleasance Courtyard (Venue 33) throughout Edinburgh Festival Fringe. ​ A post-apocalyptic black comedy set in the colourful but dirty confines of a makeshift home – the storeroom of Peek’s Party Store – their one-hour show is performed by two actors who switch roles each night.

The BA Acting graduates – who originate from Devon to Derby – have collectively written, produced and perform in the play. Meanwhile, Kirsten Banks, BA Stage Management graduate from Birmingham School of Acting, manages the production’s technical aspects.

“It’s great to be part of a new, pro-active company that have created work for themselves so early on in their career. It’s wonderful to play a part that is non-gender specific, as it allows me to push my boundaries and not conform to the stereotypical female roles.”

The winning company will be announced on Tuesday 22 August, and will be awarded a run at the Pleasance Theatre in London alongside a £500 cash prize.

“We are very proud of Theatre63 being nominated for an award at this year's Edinburgh Fringe Festival for their first-ever play, ‘Cockroached’.

“Our BA Acting encourages students to develop their own creativity and to be entrepreneurial in their approach to making their own work. Theatre63 perfectly expresses our hopes for our future graduates. We wish them luck!”

All members of Theatre63 graduated from Birmingham School of Acting, part of Birmingham City University, in 2016 and the company are now based in London.