Birmingham graduate named as a rising star in the games industry 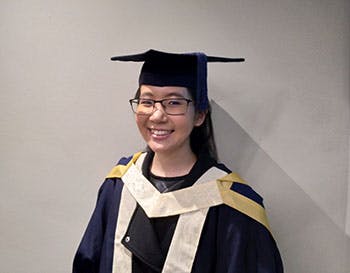 A graduate from Birmingham City University has been named among the top 100 future greats within the UK games industry.

Splitting her time between gaming company Dibdib Studios in London and freelance work, Michelle sees games as the perfect avenue to balance both her technical and creative interests.

Unlike a traditional university course, Gamer Camp students build real games from the ground up, operating in a studio environment over one year. It is among the first five courses in Europe to be given PlayStation 4 development kits by Sony and is also backed by the likes of Codemasters, Crytek, FreeStyleGames, Rare, TT Fusion and UKIE.

As well as being nominated for Student of the Year at the University’s Extra Mile Awards and winning the Student Award at the European Women in Games Conference in 2017, programmer Michelle was also the seventh winner of the Toptal STEM Scholarships for Women.

In addition, Michelle is a member of the BAFTA Crew Games network, a STEM Ambassador and a Women in Games Ambassador, all alongside being a Google Udacity Scholar. Regularly volunteering at game industry events, her drive to improve gender and race equality within the industry is now shaping her future career.

I'm proud whenever I finish a game and people get to play it, and if it made them happy or made a little difference in their lives

I'd like to increase the ratio of women working in the games industry. Part of what I do as a STEM Ambassador and Women in Games Ambassador is talking to young girls and encouraging them to pursue STEM and games as a career.

I'd also like to start a gaming incubator for underrepresented game developers, especially women and people of colour.

Organisers have said that this year’s list suggests the future of the UK games industry will be diverse. Over half those nominated were not men, and over 60 per cent identify as either female or non-binary.

Hundreds of names were put forward for the list from businesses, trade bodies and industry groups within the gaming sector, and these were whittled down by a team of judges from organisations such as Electronic Arts, Warner Bros and Xbox.

“I couldn’t be more proud of Michelle and also very pleased that our Gamer Camp programme allowed her to flourish.

“Michelle’s continued success is a reflection of the passion and hard work she puts into her career. I’m really looking forward to some brilliant developments from her in the future”.