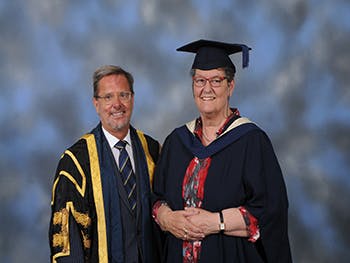 A retired mother of two who missed graduation when her husband was taken ill has finally donned a cap and gown - more than 30 years after finishing her studies.

Jennifer Tinsley, 70, completed a Health Visiting course at Birmingham Polytechnic (now Birmingham City University) in 1984, but was unable to pick up her certificate after staying home to care for her spouse.

Nearly 31 years later, after seeing her two daughters graduate, the former nurse decided she would like to relive her missed opportunity and finally attend a formal ceremony.

After speaking with her daughter, Birmingham City University gave the green light for Jennifer to be included among this year's honours.

When she finally crossed the stage at Birmingham's Symphony Hall to collect her parchment, Jennifer said the experience was all quite surreal.

"It was all a surprise and I first found out through a phone call from my son-in-law to say I'd been invited to the ceremony. It just doesn't seem real, this just doesn't happen to people like me.

"Because my husband at the time wasn't well enough that particular day to come for the graduation, I missed it. But my two daughters, sons-in-law and husband had all got caps and gowns.

At first I thought it was all being made up and they were playing a trick on me but my daughter confirmed it was true and here I am. I'd never expected this.

Before attending the University, Jennifer spent 17 years fulfilling her childhood ambition of working as a nurse.

After completing her studies she spent 15 years in health visiting, assisting families and young children in the West Midlands.

She was the last person to receive their certificate during a ceremony honouring hundreds of students including some more than 50 years her junior.

Professor Cliff Allan, Vice-Chancellor at Birmingham City University, said: "To be given the opportunity to finally present Jennifer with her certificate after all this time is as pleasing as it is heart-warming.

"When we heard Jennifer's story we were more than happy to help and I hope it has been as special and memorable a day as she'd wished for."