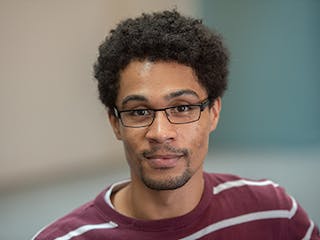 Works in the Game Team at Codemasters

At the recent industry showcase, we spoke to graduate Joel Page, who now works as part of the Game Team at Codemasters. After completing his undergraduate degree at another University, Joel decided to take part in our Gamer Camp and complete his Postgraduate degree in MSc Video Game Development.

School of Games, Film and Animation

Hi Joel. Can you tell us a little about how you got your job at Codemasters?

Well, I have to thank Gamer Camp a lot for this, because they essentially set us up with interviews. All of the programmers got one and we were all given a briefing and some practice interviews. The interviews at Codemasters were towards the end of the course when we already had a game made so we had something to talk about. The interview went quite well and Codemasters followed it up and said they wanted to hire me!

Can you tell me a little about what your job consists of?

I’m part of the Game Team there and I am now working on the F1 games, writing new features and sometimes expanding on old features that already exist. It’s quite different to what you would expect in terms of going from designing the game and taking it through the starter production. It’s actually a lot more difficult than I anticipated. It’s not like some games where you can just write the code and, as long as everything works OK, that’s it and it’s finished. We have to ensure the game is going to be in a state that we can improve on in the future. We essentially have to write code that is maintainable year upon year.

When you started as an undergraduate student, did you know this is what you wanted to be doing?

Well I know that I always wanted to and I probably wasn’t going to stop trying until I did. I didn’t think I would end up going straight into a AAA studio, that’s for sure! That is the goal of Gamer Camp though, they are training you to work in a AAA studio.

How would you describe the course and what were your highlights?

I found the course amazing and I would recommend it to anyone that wants to go into making games, whether it’s art, production, design or programming. The best part about the course was just always being around people that are like me, everyone there enjoys games and wants to make games, the lecturers included. They are completely passionate about games. I spent a lot of time playing games with the lecturers, it was great that my programming lecturer was into the same games as I was so we played a lot. It helps at the end of the day when you’ve been working hard or you are stressed out to just be able to relax and play some games in the studio with everyone else. That is the highlight, having fun with the people I am working with. It still happens in the industry now, at Codemasters I play games with people I am working with.

What would your advice be on getting a job after finishing university?

People probably say this all the time and it is probably cliché, but if you are passionate about something, it will come across in the interview. If you like games, talk about what games you’ve played and talk about what you like and what you dislike about them. You need to be professional but at the same time you need to be yourself and show your passion in a natural way. I think the best way to come across as professional in the Gaming industry is to actually make a game and work on it.