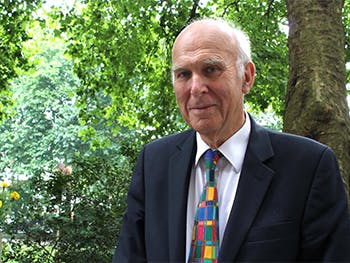 Sir Vince Cable has been appointed Visiting Professor at the Centre for Brexit Studies at Birmingham City University, as well as BCU’s Institute for Design and Economic Acceleration (IDEA).

Sir Vince Cable was named Leader of the Liberal Democrats in July 2017 after a career in politics spanning over 20 years.

He read Natural Sciences and Economics at Cambridge University, where he was President of the Union, followed by a PhD at Glasgow University. In 1981 he joined the Social Democratic Party (now the Liberal Democrat Party) and has been a member ever since. He was first elected as the Member of Parliament for Twickenham in 1997.

During the coalition government, Sir Vince was the Secretary of State for Business, Innovation and Skills. Before starting his career in politics, he spent a lot of his life in academia and business, including the role of Chief Economist at Shell.

The politician has a track record of supporting the University. On being named Leader of the Liberal Democrats in July 2017, Sir Vince chose to speak at Birmingham City University at his first engagement in the West Midlands.

It is hoped that Sir Vince will use his extensive list of contacts to add to the stable of collaborators, including economist Vicky Pryce, Research Professor Vernon Bogdanor, political economist Will Hutton and author AC Grayling.

The IDEA Institute think tank, which supports start-ups and entrepreneurial development, will be drawing on the politician’s extensive economic insights and experience as an economist, while the Centre for Brexit Studies will be tapping into Sir Vince Cable’s political expertise.

Sir Vince Cable MP commented: “I was delighted to be responsible for bringing Beverley Nielsen into the Lib Dems and for as long as I have known her she has worked at BCU, most recently leading her think tank, the Institute for Design & Economic Acceleration, IDEA, and her engagement with the University’s innovative Centre for Brexit Studies.

“Through this relationship I have been able to visit BCU on numerous occasions and very memorably on taking over the leadership of our Party. I congratulate the University for its outreach and business engagement and see it is firmly positioned as the university meeting the needs of the people of Birmingham,” he added.

“We look forward to working with Vince, and collaborating in future work and events.”

“I have had the pleasure to work with him previously on a number of projects, in his role as Secretary of State for Business, Innovation and Skills in the Coalition Government some years back and his impressive background and knowledge will bring a huge amount to the University, and his contributions in the two areas will provide more opportunities and exciting collaborations.”

Through the appointment, Director of IDEA Institute and mayoral candidate for the Liberal Democrats in the West Midlands Beverley Nielsen is aiming to put greater focus on shaping regional devolution to deliver inclusive, sustainable clean wealth creation, embedding this in longer-term business support systems.

Beverley said: “I joined the Liberal Democrats in 2008 after reading Sir Vince Cable’s book ‘The Storm’ and have been inspired by his economic insights and leadership ever since. I’m delighted that we’re able to build on these links through BCU to develop opportunities for further collaboration in the future.”