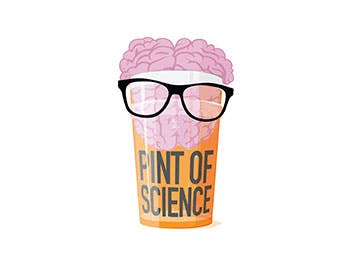 The world’s largest festival of public science talks will be bringing over thirty scientists to the stage in pubs around Birmingham city centre from 15 to 17 May.

The international three-day Pint of Science festival will see thousands of scientists simultaneously standing up and telling the public about their research in over 100 cities across 12 countries.

Founded five years ago by two UK researchers, the festival brings a unique line up of talks, demonstrations and live experiments to the nation’s favourite locals.

Researchers from Aston University, Birmingham City University and University of Birmingham will be popping up at various pubs around the city centre, including The Church Inn, The Gunmakers Arms, Island Bar, The Platform at Millennium Point and The Woodman.

Professor Alex de Ruyter from Birmingham City University’s Centre for Brexit Studies will deliver a talk on ‘A Survivor’s Guide to Brexit’ on 17 May, whilst Tom Mills from Aston University speaks about his recent book on the myths of BBC broadcasting.

Tickets are available from the Pint of Science Birmingham website, with each evening costing £4.

Festival-goers will enjoy a variety of thought-provoking talks including: how the human mind works, how forensic linguistics is used to catch criminals and the potential of stem cell research in the treatment of dementia.

Alongside the main talks, each evening will also include a range of fun, science-related activities including live experiments, quizzes and puzzles.