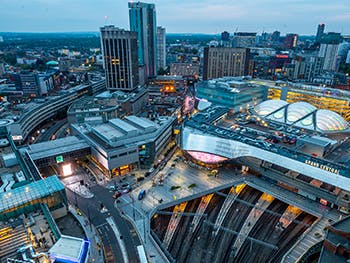 With the Centre for Brexit Studies online Annual Conference less than two weeks away, four of the leading contributors to this year’s event have joined forces to discuss the event, their panel topic and the latest in Brexit news.

In this month’s Centre for Brexit Studies podcast, Director Professor Alex de Ruyter was joined alongside Professor Calvin Jones, Vicky Pryce and Ian Henry to discuss the Conference and what they’re hoping to get out of the online event, as well as an in-depth discussion around each of their panel topics.

The Conference, titled ‘Global Birmingham – Beyond Brexit’ is taking place online on Zoom as a virtual experience on Wednesday 23 September, from 9am to 5pm. The free event will discuss the West Midlands in a post-Brexit landscape, bringing together a wide range of guest speakers and industry experts with insightful talks and panel debates.

Focusing on the West Midlands beyond Brexit, the event will look at topics such as the Commonwealth Games, HS2, Manufacturing and the future of the region in a post-Brexit landscape.

Confirmed speakers and panel members for the online conference include Sir Vince Cable, former leader of the Liberal Democrats, Anand Menon, Professor of European Politics and Foreign Affairs at King's College London and Director of UK in a Changing Europe and Fiona Allan, Artistic Director and Chief Executive of Birmingham Hippodrome and President of UK Theatre. They will be joined alongside 23 esteemed panel members.