Chequers is not salvageable, it’s dead in the water 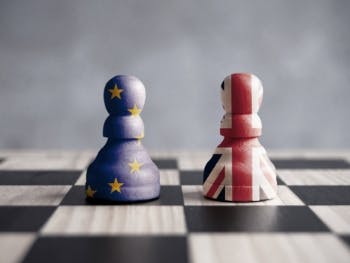 A top Brexit academic has today stated his belief that the chances of a ‘no deal’ Brexit are now looking increasingly likely.

Professor Alex de Ruyter, Director of the Centre for Brexit Studies at Birmingham City University, spoke of his lack of surprise at the EU’s rejection of the Chequers Plan as it currently stands.

Speaking with BBC Coventry and Warwickshire this morning, Professor de Ruyter stated that: “The odds of a no deal [Brexit] are looking increasing likely.

I think it’s slightly disturbing that Theresa May would make a comment that she wants to know what the EU’s concerns with the Chequers Proposal are, when they’ve said loud and clear all along that they want the integrity of the Single Market as they see it.”

“Chequers basically has two aspects, one was that the UK proposed a Single Market for goods and agriculture and the other aspect was that the UK government in effect want a Customs Partnership with the EU.

“Think of all the design, the engineering- they’re inputs!  So to hypothetically just hive off one chunk and just have one piece of the cake as it were, is a non-starter and to be fair to the EU they’ve always said that’s a non-starter!

“Chequers is not salvageable, it’s dead in the water.”

With the ever increasing lack of options available, Professor de Ruyter offered his insights on what he believes are the choices now available to the Prime Minister.

“Where does she go?  She has fifty-odd MPs led by Jacob Reese Mogg, who are opposed to any kind of deal, other than a free trade agreement and that won’t wash with the opposition [because] they want something stronger- they want a Customs Union with the EU.

“So there is no majority in Parliament for any kind of deal that Theresa May can realistically put on the table.

“If she moves further in the Norway direction that she risks splitting up her own parties.  She’s shown no desire to do that, understandably enough.

“So the only realistic thing I think left on the table, increasingly it looks like another vote.”

Professor de Ruyter and his team continue to research the potential economic and societal impact of Britain’s decision to leave the European Union.

For further details on the Centre for Brexit Studies current research, including the work carried out with preparing businesses for Brexit, please visit the website at www.bcu.ac.uk/centre-for-brexit-studies or find us on Twitter @BCU_CBS.