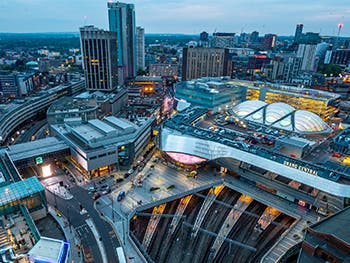 The Centre for Brexit Studies are delighted to announce that their Annual Conference, which is now in its third year, will return to Birmingham this spring, in an event that will discuss what the West Midlands region could look like in a post-Brexit landscape.

Taking place on Wednesday, 23 September at The Old Library in Digbeth, Birmingham, the event will bring together a wide range of industry experts to discuss topics including the Commonwealth Games, HS2, manufacturing and the future of the West Midlands. The event will be hosts to a variety of keynote speakers and panel members, who will ask the big questions surrounding the future of the region.

The conference, titled ‘Global Birmingham – Beyond Brexit’, will also offer brilliant networking opportunities with academics and business professionals throughout the day and the chance to get involved, as well as the opportunity to find out more about the Centre for Brexit Studies and our research.

Confirmed speakers and panel members for the conference include Sir Vince Cable, former leader of the Liberal Democrats and Secretary of State for Business, Innovation and Skills from 2010 to 2015, and Anand Menon, Professor of European Politics and Foreign Affairs at King's College London in the United Kingdom and Director of UK in a Changing Europe.

Also on the line-up, there is Julian Beer, Deputy Vice-Chancellor at Birmingham City University, Beverley Nielsen, Liberal Democrat Candidate for West Midlands Mayor, Vicky Pryce, Economist, as well as Centre for Brexit Studies Director Professor Alex de Ruyter and the Centre’s academics, with many more names to be announced.

Lunch will be provided for all event delegates, as will refreshments throughout the day.

To attend this event, you must be registered. This event is FREE to attend.

When posting about the event on social media, make sure to use the hashtag #CBSGlobalBrum.

Register for your tickets to this event via Eventbrite.