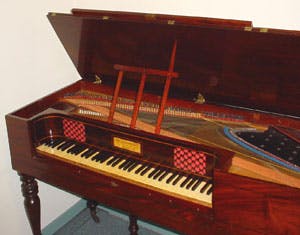 Most of the instruments in the Historical Instrument Collection were recorded for the Catalogue Project by specialists in the field of period instrument performance.

Their contribution to the project included ascertaining the nominal and performing pitch of the instruments and any characteristics of performance (including notes on tuning, moving parts).

They also identified faults not revealed during a visual inspection (leaking key pads, joints on brass instruments and cracks in woodwind instruments).

Where an item was suitable to be played and in a good enough state or repair, recordings were made using the studios at Birmingham Conservatoire.

The audio examples have been used as part of the Historical Instrument Studies podcast series.

About the music chosen for the audio examples

The pieces of music used for these recordings were chosen to highlight particular characteristics of the instruments, whilst being typical repertoire for the general period in which the instrument was made.

The development of musical instrument making is both a story of composers and performers demanding improvements and alterations to instruments, and that of makers experimenting with new features and inventing new instruments.

In general, the music chosen was written at the time of the making of the instrument or earlier, rarely later. In many cases, extracts were chosen that didn’t require certain notes or faulty keys, or that avoided range with intonation problems.
All audio samples are available as a WAV file (CD quality) or as an MP3.