There's been a lot going on in the faculty of Computing, Engineering and The Built Environment this month, from a police car being used in a student film on campus to new appointments and league table rises. Join us in celebrating these successes!

Producer Sophie Tulley and Director Charlie Franks arranged with West Midlands Police to have a police car on campus to complete their Production Project Film ‘Bugs’.

The arrangements with West Midlands Police began with a previous project students completed with their Digital Film Production course. The producer and Director of Bugs reached out to them asking if they would support the creation of their film. They were delighted to have them involved and appreciated the elevated production value from this partnership.

“In my short Film BUGS we had the Honour to collaborate with the West Midlands Police Lock Up Museum. We were introduced to the Lock Up Museum to create an interactive experience. By keeping contacts introduced by BCU I managed to organise a Police car for my final year film and it was such an amazing experience and brought so much to the film” - Charlie Franks

Professor Adel Aneiba has been appointed permanent Head of School of Computing and Digital Technology. Professor Aneiba joined BCU in November 2016 after gaining his PhD from Staffordshire University, and working for UNESCO and Benghazi University in Libya.

Professor Adel Aneiba said: “This is a School with a long and proud history, and strong connections to wider communities nationally and internationally. Since starting at the School, I have been inspired by our talented multi-disciplinary staff, attractive academic portfolio, long-standing industry links, interesting applied research areas, and diverse community."

Birmingham City University has been ranked 5th in the Guardian League Tables for the subject area “Animation and Game Design” which includes various courses in the Digital Technology subject area including Visual Effects, Computer Games Technology and Digital Film Production.

The graduate outcomes is 89%, which is one of the highest in the whole list of 44 universities which were ranked.

Explore BCU for yourself

Attending one of our Open Days is the best way to experience what BCU has to offer.

Saeed Talebi, Senior Lecturer in Quantity Surveying and Course Leader for BSc Quantity Surveying has been shortlisted to put forward an application for a prestigious funding scheme called Future Leaders Fellowship Scheme that aims to develop future leaders in research and innovation

Each university can put forward a limited number of applications for this scheme. For the 7th round of the FLF scheme, BCU could have 2 applications. Saeed’s application, titled “Digital Twins for the condition assessment of underground infrastructure with advanced digital sensing technologies”, has been selected for this round after passing two internal competitions.

Mohammed Gaber, Professor in Data Analytics, has been listed in the Top 2% of world’s scientists according to the latest study by Elsevier and Stanford University, released this month (10 October 2022). He is the only scientist at Birmingham City University to be listed in the career-long top 2% of scientists world-wide. He is also listed in the top 2% according to last year’s impact. He is the only researcher at BCU to appear in the two lists (career-long impact and single-year impact). His listing in this study is done for the third year in a row. 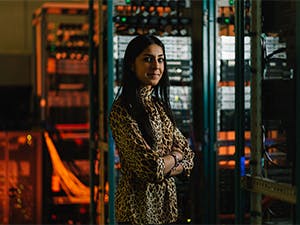 There's so much going on in Birmingham – from the buzzy street markets to the unmissable transformation of the whole city and our campus. Study here and you'll be at the heart of it all. You too could be taught by our trailblazing academics and study in our innovative £340m facilities.