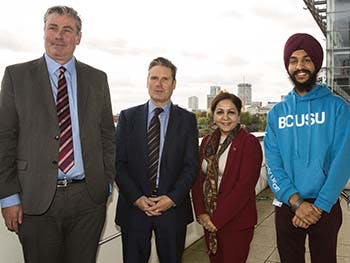 Shadow Brexit Secretary Sir Keir Starmer has said understanding how other EU countries think will be key to negotiating Brexit, during a visit to Birmingham City University’s Centre for Brexit Studies.

The MP for Holborn and St Pancras was in Birmingham to speak to business leaders alongside West Midlands MEP Neena Gill, before taking questions from students and academics at the University’s Centre for Brexit Studies.

Speaking at Birmingham City University Sir Keir said while we naturally gave a lot of attention to what Britain needed from a deal with the EU it was important that we also attempted to understand how the other Member States viewed Brexit.

We talk a lot about what the UK needs from Brexit, but unless we understand what is going on in the other 28 countries and what they think, negotiations will be extremely difficult.

Sir Keir also said the election of Donald Trump to US was likely to ‘change the dynamic of Europe’ and that Brexit negotiations would have to address the concerns of both those that voted Leave, and those who voted Remain.

He said: “52 per cent of people voted leave for a reason and it is important that we understand their views and feelings. But at the same time, we can’t ignore the feelings of the 48 per cent.

“Last year the Prime Minister gave her interpretation of the referendum result to the nation and in my view it was an extreme interpretation.”

The Shadow Minister for Exiting the European Union was shown the facilities at Birmingham City University and was introduced as a special guest to take questions from students taking part in a lecture on Brexit.

He also spent time discussing the views and research activities of academics working at the Centre for Brexit Studies.

Academics will be discussing the various courses linked to the Centre for Brexit Studies at Birmingham City University’s Open Day on Saturday October 14.

Courses in subjects like Business, Law, Criminology and Education will be on show, which all contribute to the research and documentation process which is taking place at the Centre.