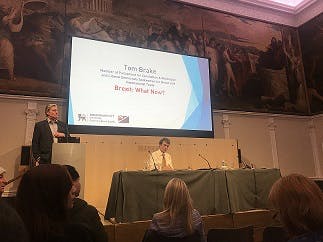 The Centre for Brexit Studies at Birmingham City University are celebrating the success of their second Annual Conference.

The Conference, which took place on Friday March 29 at The RSA in London, was titled ‘B-Day: Making a Success of Brexit?’ and brought together people from all walks of life, with panel debates attracting those with interests around the automotive industry, the media and much more on the day that the UK was set to leave the European Union.

The Centre for Brexit Studies were set to be joined by Sir Vince Cable, Leader of the Liberal Democrats. However due to urgent commitments, he was replaced by Tom Brake, MP for Carshalton & Wallington, and Liberal Democrats Spokesman for Brexit and International Trade.

The event began with a welcome from Centre for Brexit Studies Director Professor Alex de Ruyter, who went onto discuss the ‘left behind regions’ in the UK following the EU Referendum. He was followed by Sir Bernard Jenkin, who discussed what he believes the next steps in the Brexit process should be.

Later in the day, Professor Vernon Bogdanor talked about the consequences of Brexit and the impact it will have on the UK, and the Conference was drawn to a close with Tom Brake, who discussed the day’s Brexit events and what’s next.

This was followed by ‘Brexit and the Automotive industry’ which saw panel experts debate what is next for the industry in the UK without the EU. Panellists included Professor David Bailey, Professor of Industrial Strategy at Aston Business School and Tom Leeson, Industry Strategist for the Manufacturing industry at OpenText. They were joined by Ian Henry, Managing Director at AutoAnalysis and Beverley Nielsen, Executive Director of IDEA at Birmingham City University.

In the afternoon, audience members were joined by Journalists Liz Gerard, former Night Editor at The Times, John Mair, Editor and Producer and Raymond Snoddy, Media Commentator, for the ‘Brexit and the Media’ panel debate, which aimed to examine the impact that Brexit has had on the media, and how Brexit has been portrayed in the press over the last 3 years.

The final session of the Conference was ‘Young People and Brexit’, which aimed to give young people a voice and a place for them to share their opinion around Brexit and UK Politics. Panellists included David ‘Sideman’ Whitely, BBC 1Xtra Presenter and Social Media Influencer, Dr Elizabeth Norton, Policy Analyst at Birmingham City University, Yasmeen Zaman, Centre for Brexit Studies Intern and Joshua Hockley-Still, PhD Student at the University of Exeter. They were joined by several Birmingham City University students.

Business owner and activist Gina Miller also joined the Conference via Skype and was interviewed live on topics around Brexit and her thoughts on what should happen next.

Centre for Brexit Studies Director Professor Alex de Ruyter said: “We are incredibly pleased with how our second Annual Conference went. The RSA, which is steeped in rich history, was the perfect venue for the event and we enjoyed people from all backgrounds sharing their opinion and views around Brexit.

“With it taking place on yet another day of votes in Parliament, and on the day the UK was meant the leave the EU, it was an exciting event which examined views from both sides of the Brexit debate, whilst just being a stones throw away from the Houses of Parliament.

“We look forward to seeing what 2020 could bring.”

Conference attendees were also given plenty of time to network, and enjoy a wide variety of refreshments and lunch options.

It was always going to be somewhat of a landmark day, whether we left the EU or not. However, the Conference was a huge success for the Centre, with the focus now on what will take place next year.