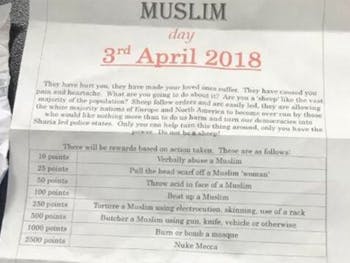 What do bank robbers and Muslim women have in common? According to the former Foreign Secretary and former Mayor of London, Boris Johnson, Muslim women  wearing the Burqa look like “letter boxes” and “bank robbers”.

I was horrified to read the subsequent headlines that assumed that this was a “gaffe” too far.  No – this was not a “gaffe”.  This was a leadership call to those that pander to the far-right. Boris Johnson’s incendiary comments are particularly important in the current climate of ‘hate’ and rhetoric surrounding Donald Trump’s election, Brexit, and the political ascendancy of white nationalist parties in Europe and globally. For example, across Europe “visible” Muslim markers such as the face veil have led to countries such as Denmark, France, Germany, Austria and Belgium banning the burka and niqab.

The third party reporting agency Tell MAMA, recently found out of its 1,201 verified reports submitted in 2017, there was a rise of 26% on the year before and this is the highest number, since it began recording incidents.  The data also shows that Muslim women remain those targeted the most.  My research has shown that “trigger” events such as the 9/11 and 7/7 attacks, and more recently the terrorist attacks in Paris and Tunisia in 2015, and the murder of Lee Rigby in 2013, show a significant increase in reprisal anti-Muslim attacks.

Reports of mosques being vandalised, Muslim women having their hijab (headscarf) or niqab (face veil) pulled off, and racist graffiti being scrawled against Muslim properties has become normalised. “Trigger” events can lead to reprisal attacks and can also enable behaviour that promotes a type of hate that we witnessed with the ‘Punish a Muslim’ day letter.  The letter set out different points to score regarding verbally and physically attacking Muslims.

Incidents and comments like those by Boris Johnson, only further exacerbate intolerance and hatred.  It also promotes Islamophobia which means the fear, prejudice and hatred of all Muslims that is promoted by institutional, ideological, and political groups/individuals transcends into structural racism that targets the symbols and markers of a being a Muslim.
Dr Imran Awan

This is important, because it would indicate that Boris Johnson’s comments are not only ill-advised, but they are a manifestation of such attitudes, triggered by the visibility of Muslim women’s identity. What Boris Johnson was really saying was that Muslim women are a threat to British values and national identity.

When I was commissioned to co-author a report on the impacts of Islamophobia on Muslim women, we found that there was a steadily increasing fear and perpetuating anti-Muslim hate rhetoric.  For example, the Muslim women we spoke to talked about having their headscarfs pulled off and feeling threatened by those who viewed them as “outsiders”.

In a globalised world, such statements and actions can cause further resentment and even murder.  For example, Jeremy Joseph Christian became enraged when he saw a young Muslim woman wearing a hijab on a commuter train and began verbally abusing her. He ended up using a knife to kill two passengers who tried to intervene, Ricky John Best and Taliesin Myrddin Namkai Meche, and seriously wounding a third, Micah David-Cole Fletcher. Christian was charged with two counts of aggravated murder but defended the killings in a courtroom rant.

“Death to the enemies of America. Leave this country if you hate our freedom,” he said. “You call it terrorism, I call it patriotism.”

Boris Johnson’s comments have labelledMuslim women as being both dangerous, and a threat.  As Islamophobia becomes more rampant, the conflation between extremism and visible markers of faith have constructed Muslim women as being the new folk devils.  Such comments add to the polarisation and moral panic within society which often asks Muslim women to show their level of loyalty by removing their veil because it is deemed to be a question around integration and citizenship.  In our study, the physical and emotional trauma experienced by the Muslim women we spoke to often impacted upon the quality of their lives.  Muslim women should stop being treated as an “alien” group that is considered deviant and dangerous to our society.  As a consequence, Boris Johnson’s comments send the message that Muslim women who dress visibly based on their faith as “outsiders.”  His comments can also lead to trigger attacks against Muslims because they are deemed as being part of the problem. It’s about time we challenged the hateful rhetoric of some political leaders as Muslim women should not be consistently demonized and viewed through the lens of counter-terrorism.

Dr Imran Awan is an Associate Professor of Criminology and Co-Director of the Centre for Applied Criminology at Birmingham City University.

He is a leading expert on Islamophobia and is co-author of the book: Islamophobia: Lived Experiences of Online and Offline Victimisation which is published with Policy Press