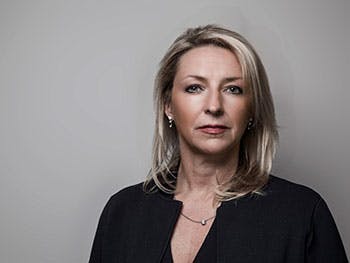 A high profile legal expert who has been practicing for over 33 years is to be honoured at a Birmingham City University ceremony this month.

Sallie Bennett-Jenkins QC, frequently cited by the legal industry as a leader in her field, will be conferred with an honorary degree from the University for her achievements in law before students graduating from the institution’s Faculty of Business, Law and Social Sciences.

With extensive expertise in relation to intelligence led operations and offences of terrorism, Sallie has maintained a diverse defence practice which ranges from murder to fraud and advisory work for multinational corporations in respect of computer crime.

Originally from Gorseinon near Swansea in South Wales, Sallie went to school in Birmingham before attending University College Law in London. She later studied for the Bar at the Inns of Court School of Law, London.

Sallie undertook pupillage to Lord Justice Goldring at 2 Crown Office Row in Temple and to Martin Heslop QC at 2 Hare Court, also in Temple. Following her pupillage, Sallie was offered tenancy at 2 Hare Court, where she has practised from since.

Appointed in 1998 by the Attorney General as Treasury Counsel to the Central Criminal Court, the Old Bailey, Sallie became one of 14 barristers selected nationwide to prosecute some of the most grave and high profile cases. She was the only women to hold this position at the time.

Sallie remained as Treasury Counsel until her appointment as Queens Counsel in 2006 and is one of the very few women who practise as top ranked Queens Counsel.

With specialist expertise in relation to trials that are in the public eye, Sallie’s work has included defending a number of celebrity clients linked to allegations of violence and sexual assault.

Sallie is regularly chosen to represent clients of all ages, in the most serious criminal allegations; her client care and her commitment are hallmarks of her practise.

Ahead of receiving her honorary award, Sallie said: “I’m delighted to receive an Honorary Doctorate from Birmingham City University.

I look forward to meeting the legal professionals of the future who’ll be graduating with me.

Sallie will receive her award on Wednesday 26 July, where Birmingham City University law graduate Rachelle Harrison will also be honoured as Alumni of the Year after being called to the Bar aged 22 and defending a client at the 2005 London bombings trial.